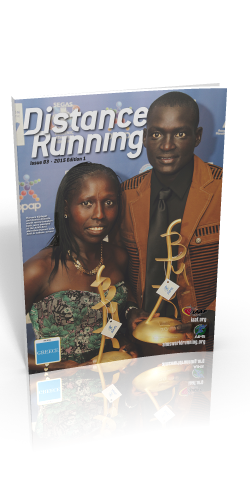 With miles of glorious, unspoilt golden sands and clear blue sea, Bournemouth and Poole provide a stunning backdrop for the ultimate run in a pure and clean natural environment: running as it should be.

Every October runners from across the USA and around the world travel to the Bank of America Chicago Marathon.

Podgorica, the capital of Montenegro, is a city of 150,000 citizens making up almost one-third of the national population. The name translates from Serbian as “under the Gorica” where Gorica means “little hill” or hillock, referring to the cypress-covered hill that overlooks the city centre.

Thirty thousand runners participating; ten thousand volunteers providing support; and hundreds of thousands of roadside spectators cheering the runners on. Welcome to the Osaka Marathon, the biggest in Japan.

Sixty thousand runners thronged the Sultan Abdul Halim Muadzam Shah Bridge — the second one to be built from the mainland to Penang Island — for the rare opportunity to run on the longest bridge in South East Asia.

“Thanks and friendship, 20 years after the earthquake” was the theme of the 2014 Kobe Marathon, and it literally shone through from the start. A sea of yellow-gloved runners in the full marathon provided the backcloth for the Mayor, in a striking red cap and jacket, to fire the starting gun at 9:00 sharp. Taken together they represented a sunflower: the symbol of the city’s regeneration.

Big in Japan
Running into history

Everyone knows that the Japanese nation has a love affair with the marathon. But that emotional connection, perhaps unique to Japan, still needs to be nurtured. Read on below for an insight into how this happens. 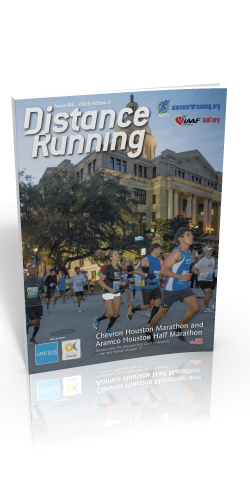 Cover: Runners in the Chevron Houston Marathon (USA) pass the Houston First Court of Appeals early in the morning of Sunday 18 January 2015.

Every February the city of Terni gives a warm welcome to visitors from all over the world. They come to visit Saint Valentine’s Church, to pray at the tomb of the patron saint of the city and to run by the Marmore Waterfall with its impressive 165m drop.

Dreams, whether of the ’e’ variety or not, come true in this magic springtime event held in the Catalan capital. Last year Florence Kiplagat shocked the road running world by slicing 38 seconds off the highly-respected world record held by her Kenyan compatriot Mary Keitany. This year she went one better by shaving a further three seconds off her time of last year with a posting of 1:05:09.

Do you Kyoto?
Features Kyoto Marathon, February 20 2015 by Ido Kyoto

The Kyoto Marathon is one of Japan’s major mass-participation marathons, attracting 16,000 runners and 500,000 spectators, and involving some 15,000 staff and volunteers. Kyoto has a unique culture and history stretching back more than 1,200 years. The products of many traditional industries nurtured by this cultural history are widely known and appreciated throughout the world. Kyoto was top-ranked in the 2014 “World’s Best Cities” rating of tourism destinations released by Travel + Leisure, one of the world’s most influential travel magazines.

Houston: ‘we have no problem’
Features Chevron Houston Marathon and Aramco Houston Half Marathon, January 20 2015 by Vicky Oddi

On every third Sunday in January 25,000 runners from across the USA and around the world line up to run one of the flattest, fastest marathons in North America. 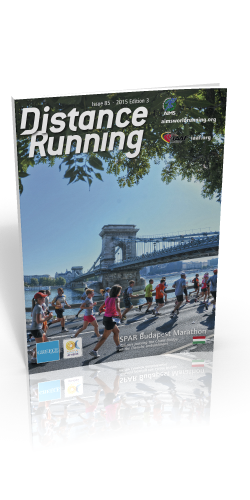 Back on track in Bengaluru
Features Tata Consultancy Services World 10K Bengaluru, May 20 2015

Bengaluru seemed like the ideal place to start afresh: 10,000 metres through the heart of the city and past its iconic landmarks

For many runners the Marathon provides a chance to visit parts of the city that they rarely see when training. It’s an urban tourism opportunity for many inhabitants of Caracas: a chance to rediscover their own city.

They come year on year from all places to the Austrian Women’s Run and are of all ages and levels of ability. Running together every woman offers her personal best efforts and all contribute to making the event into an incomparable experience.

There are 20 AIMS members in Italy: as many as in marathon-mad Japan and more than any other country. What makes the Marathon so popular there? Alessio Punzi, former Communications Officer of the Rome Marathon, offers his insight

In 1984 a few Hungarian sports organisers dreamed of staging a people’s marathon in Budapest. Today, the last decade has been one of continuous growth. Hungarians came to appreciate the marathon and foreign runners have begun to discover quite how gorgeous a course Budapest offers. 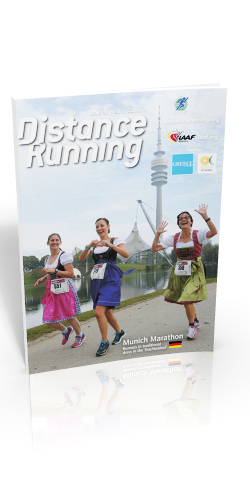 Ladakh is a hub for adventure tourism: people come for trekking, mountaineering, river rafting, cycling — and of late, for running.

The Sunshine Coast lives up to its name – and not least with its world-class Marathon and Community Running Festival which has been voted among the six ‘Most-Loved’ marathon events in Australia.

At 60 degrees North the clear sun and long hours of daylight generate a special atmosphere. At this year’s Helsinki City Marathon it again proved so as Finland’s largest marathon more than met the expectations of runners.

At one time distance running was one of the cleaner disciplines under the athletics umbrella but when significant prize money arrived on the scene with the big city marathons it greatly intensified the incentive to cheat, says Hugh Jones.

Bavaria’s largest marathon offers a scenic and fast route that takes runners past Munich’s most famous landmarks. Countless highlights follow one after another during the 42195m before reaching the finish line in the Olympic Stadium. The finish is an emotional place as runners cross the line to the cheers of the crowd.

Balmy ocean breezes, swaying palm trees, and miles of white sandy beaches caressed by crystalline waters – could there be a better backdrop for a marathon?

Yilan County is well known for its spectacular landscapes, its food and its culture. Scenic marathon, tasty local food, relaxing hot springs: there are so many things to do…

With a reputation as “a marathon organised for runners by runners”, the Maratón Powerade Monterrey has grown to become the second largest marathon in Mexico.

Anyone arriving at the start and finish area of this year’s 28th edition cannot fail to be impressed by the popular touristic sites that surround them.

Over 5000 participants enjoy running a course which includes all the most iconic sights of the city. Running the marathon completes the great experience that Malaga offers.

The unique experience of running at midnight, in the very first minutes and hours of the New Year, under a sky full of fireworks turning the night landscape into a scene from a fairytale.