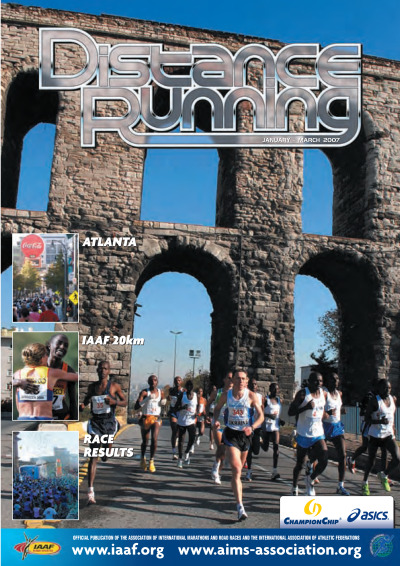 Cover: Runners at the Eurasia Istanbul Marathon, Turkey, on 5 November 2006

In China, everything is busy, busy, busy. Industrialisation and development have gathered pace incessantly for years. With the Olympics just around the corner specifically sporting activity is even more frenetic.

The city of Quito, the capital of the Republic of Ecuador, nestles high up in the Andean cordillera at an altitude of 2800m. With a population of two million it lies just a few kilometers south of the Equator. Low latitude and high altitude ameliorate each other’s influence and gift the city a mild climate in which temperatures range from 10–25C: just the right range for running. So thought the race founders, 48 years ago, when they launched the “Marathon de los Barrios Quitenos” (Marathon of Quito neighbourhoods).

Brcko is a small town with big ambitions. Lying on the Croatian border in the far north of Bosnia, it is home to a mixed population of 50,000 people. The town administration stands apart from both the Bosnia-Hercegovina Federation and the Republika Srbska. These two political entities, alongside the Brcko district, cover the territory under the national Government of Bosnia-Hercegovina.

The Kleine Scheidegg towers 1534m above the Swiss town of Interlaken. Runners in the Jungfrau Marathon have 42195m of distance in which to make the ascent. On average this is only a climb of 36m every kilometre, or a gradient of 1 in 27.5 - but nothing about this race is average.

Out of the void
Features Half Marathon of Portugal, September 20 2007

There can be few race start locations quite as exclusive as that of the Half Marathon of Portugal. Apart from a steady trickle of Sunday morning traffic along one lane of the road, nothing else can be seen that does not directly relate to the race.

The marathon offers contrasting views of the city. The common thread is the waterfront, along which the route was planned, but from the financial district to a narrow spur of land jutting out into Lake Ontario, marathon runners experience a constantly changing backdrop to their efforts.

Adrift in the Arctic
Opinion by Miles Cudmore

How do you run a marathon when every footfall is shifting under you? Miles Cudmore explains the intricacies of running the distance on polar ice.