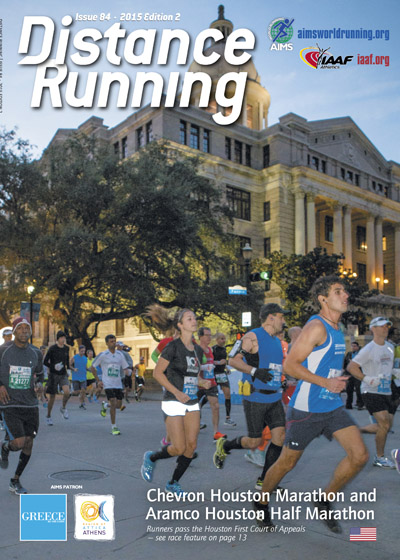 Cover: Runners in the Chevron Houston Marathon (USA) pass the Houston First Court of Appeals early in the morning of Sunday 18 January 2015.

The green heart of Italy

By Carmen Vettese
Every February the city of Terni gives a warm welcome to visitors from all over the world. They come to visit Saint Valentine’s Church, to pray at the tomb of the patron saint of the city and to run by the Marmore Waterfall with its impressive 165m drop.

By Laia Carod Comas
Dreams, whether of the ’e’ variety or not, come true in this magic springtime event held in the Catalan capital. Last year Florence Kiplagat shocked the road running world by slicing 38 seconds off the highly-respected world record held by her Kenyan compatriot Mary Keitany. This year she went one better by shaving a further three seconds off her time of last year with a posting of 1:05:09.

By Ido Kyoto
The Kyoto Marathon is one of Japan’s major mass-participation marathons, attracting 16,000 runners and 500,000 spectators, and involving some 15,000 staff and volunteers. Kyoto has a unique culture and history stretching back more than 1,200 years. The products of many traditional industries nurtured by this cultural history are widely known and appreciated throughout the world. Kyoto was top-ranked in the 2014 “World’s Best Cities” rating of tourism destinations released by Travel + Leisure, one of the world’s most influential travel magazines.

On recovery road – At 14.46 on 11 March 2011 Japan was hit by its worst ever earthquake. It registered 9 on the Richter scale, and was one of the five worst ever suffered – anywhere. The World Bank rated it as the most expensive natural disaster in world history. (Distance Running 2012, Edition 2)

Houston: ‘we have no problem’

By Vicky Oddi
On every third Sunday in January 25,000 runners from across the USA and around the world line up to run one of the flattest, fastest marathons in North America.

By Cheryl Winn, Sian Theron, Delaine Cools
The vision of a World War I veteran became the world’s greatest ultramarathon

By Hugh Jones
Since the Marathon became a truly popular event several ideas and phrases it has generated have entered popular parlance. Whoever knew what a ‘negative split’ was before TV commentators turned their talents to the Marathon? Or a Blue Line?