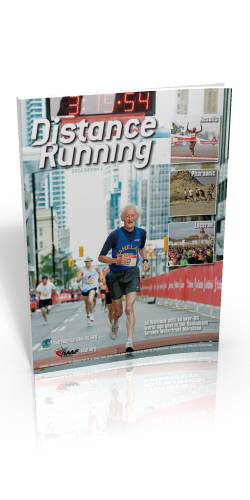 Cover: Ed Whitlock sets an over-80 world record of 3:15:51 in the Scotiabank Toronto Waterfront Marathon on 16 October 2011.

Patrick Walsh discovers a new dimension to the psychology of running a Marathon: history

The 2011 Marathon Eindhoven made headlines around the world. The outstanding new course record of 2:05:48 set by Kenya’s Jafred Chirchir Kipchumba was the talking point, but each one of the 18,000 runners who took to the streets of the Dutch city will have their own special memories of the day.

What started in 1998 as a local event to celebrate the fourth anniversary of the opening of the Teodoro Moscoso Bridge, linking the southern suburbs of San Juan to the International Airport in the Isla Verde district, has become one of the most competitive and internationally-acclaimed races in the world, and one of the largest events of any kind held in Puerto Rico.

Ed Whitlock: one of the old school
Marathon movers by Paul Gains 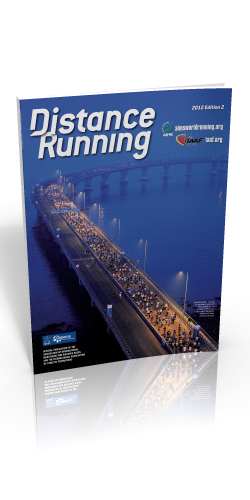 Cover: Runners in the Standard Chartered Mumbai Half Marathon stream off the 4km-long Sealink as the early-start mass marathon participants embark on their outward journey, 15km into the race.

At 14.46 on 11 March 2011 Japan was hit by its worst ever earthquake. It registered 9 on the Richter scale, and was one of the five worst ever suffered – anywhere. The World Bank rated it as the most expensive natural disaster in world history.

A popular pilgrimage in the Holy City
Features Jerusalem Marathon, Half & 10k, March 20 2012

Why would anyone want to run seven marathon distances on seven continents in less than five days? “Because I thought I could” says Richard Donovan.

On Tour
Opinion by Martin Joyce

Kinmen was first known as Jinmen (meaning “golden gate”) from Ming Dynasty times when the emperor sent in the military to protect the area against pirate attacks.

In the footsteps of a legend
Running into history Paavo Nurmi Marathon, Half and 10k by Jari Salonen

The 21st edition of the Paavo Nurmi Marathon takes place on 30 June 2012, commemorating the much earlier feats of the “Flying Finn” in the 1920s. Paavo Nurmi won nine gold and three silver medals in the Olympic Games held in Antwerp in 1920, Paris in 1924 and Amsterdam in 1928.

After helping breathe new life into the world’s only country-to-country marathon, Jim Ralston is stepping aside following a 14-year run as its race director. Under Ralston’s stewardship the race, now called the Niagara Falls International Marathon (NFIM), has enjoyed steady growth in popularity as a destination race for runners drawn by the idea of starting a race in the United States and ending it in Canada—near the brink of the iconic Canadian Horseshoe Falls, no less. 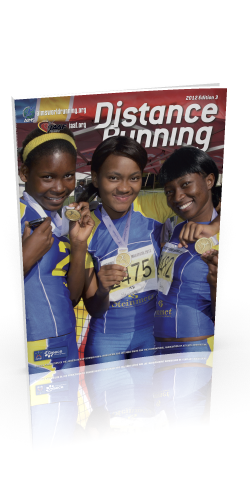 “Let’s just start something” was the simple sentiment behind the roll-out of the marathon in Düsseldorf 10 years ago. It began as something small but has grown steadily since.

A cool drizzle covered the faces of runners huddled together at the start line in the early morning darkness. A few hundred spectators had made their way to the capital’s Phakalane suburb by car, minibus, taxi or on foot before daybreak. They followed the signs in pitch dark to the Golf Estate, which had been transformed by the race organizers into a marathon and entertainment site for over 3,000 runners taking part in the 42km, 10km race or 4km fun run/walk.

Runners may have their heads in a cloud, but they always have their feet on the ground …

Then & now
Running into history by Anders Olsson

Michel Bréal: the founder of the Marathon
Running into history by Norbert Müller

The Fjord Norway Half Marathon in Knarvik is one of the great running events in Norway, taking place close to Bergen, “The gateway to the Fjords”. 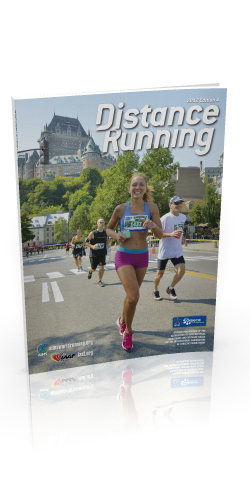 Cover: A runner passes below the dominating frontage of the Chateau Frontenac Hotel in the SSQ Quebec City Marathon on 26 August.

When athletes are called upon to bear difficult weather, topographic or other conditions – and it becomes really hard, they sometimes look for someone to blame. Their first thought is not that it is a marathon, a real one; a marathon in its original form. Maybe they were just not ready for it.

Each year in autumn ten thousand runners converge on a region in Austria called Wachau to run the Marathon there along the banks of the Danube River. For approximately 36km of its length the River Danube meanders through one of the most stunning cultural and natural landscapes of Europe, a UNESCO World heritage site …

Paraguay celebrated the 200th anniversary of its independence in 2011, which the Paraguay Marathon Club prepared for by organizing the first ever full marathon in 2010 as a test event. It was so successful that it was agreed to hold it every year…

What does Carl Lewis know about distance, asks Kenneth Lloyd…

Following in the footsteps of legend
Running into history Athens Marathon. The Authentic by Kostas Pangopoulos

The Athens Classic Marathon has unique status, being held on the authentic Olympic Marathon course. While the ancient history of this race runs back more than 2500 years, its relatively recent history started in 1896.