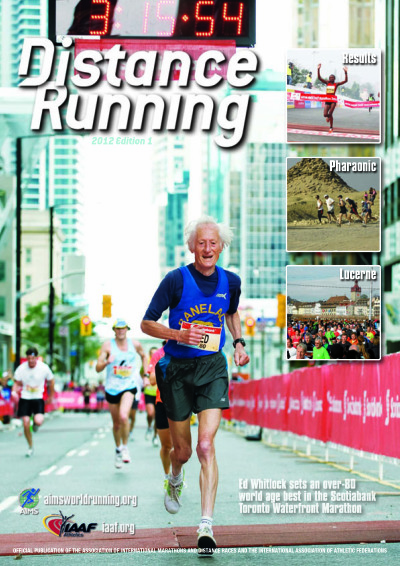 Cover: Ed Whitlock sets an over-80 world record of 3:15:51 in the Scotiabank Toronto Waterfront Marathon on 16 October 2011.

Other articles about SwissCityMarathon – Lucerne:

Fit for a king

By Patrick Walsh
Patrick Walsh discovers a new dimension to the psychology of running a Marathon: history

Designed for speed and special moments

By Phil Minshull
The 2011 Marathon Eindhoven made headlines around the world. The outstanding new course record of 2:05:48 set by Kenya’s Jafred Chirchir Kipchumba was the talking point, but each one of the 18,000 runners who took to the streets of the Dutch city will have their own special memories of the day.

In the front rank

By Jose Carmona
What started in 1998 as a local event to celebrate the fourth anniversary of the opening of the Teodoro Moscoso Bridge, linking the southern suburbs of San Juan to the International Airport in the Isla Verde district, has become one of the most competitive and internationally-acclaimed races in the world, and one of the largest events of any kind held in Puerto Rico.

Ed Whitlock: one of the old school