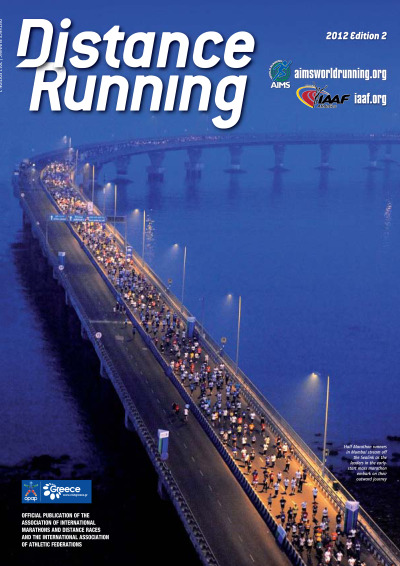 Cover: Runners in the Standard Chartered Mumbai Half Marathon stream off the 4km-long Sealink as the early-start mass marathon participants embark on their outward journey, 15km into the race.

By Jane Tse
At 14.46 on 11 March 2011 Japan was hit by its worst ever earthquake. It registered 9 on the Richter scale, and was one of the five worst ever suffered – anywhere. The World Bank rated it as the most expensive natural disaster in world history.

Do you Kyoto? – The Kyoto Marathon is one of Japan’s major mass-participation marathons, attracting 16,000 runners and 500,000 spectators, and involving some 15,000 staff and volunteers. Kyoto has a unique culture and history stretching back more than 1,200 years. The products of many traditional industries nurtured by this cultural history are widely known and appreciated throughout the world. Kyoto was top-ranked in the 2014 “World’s Best Cities” rating of tourism destinations released by Travel + Leisure, one of the world’s most influential travel magazines. (Distance Running 2015, Edition 2)

A popular pilgrimage in the Holy City

By Richard Donovan
Why would anyone want to run seven marathon distances on seven continents in less than five days? “Because I thought I could” says Richard Donovan.

By Queenie Juang
Kinmen was first known as Jinmen (meaning “golden gate”) from Ming Dynasty times when the emperor sent in the military to protect the area against pirate attacks.

In the footsteps of a legend

By Jari Salonen
The 21st edition of the Paavo Nurmi Marathon takes place on 30 June 2012, commemorating the much earlier feats of the “Flying Finn” in the 1920s. Paavo Nurmi won nine gold and three silver medals in the Olympic Games held in Antwerp in 1920, Paris in 1924 and Amsterdam in 1928.

By Joe Hvilivitzky
After helping breathe new life into the world’s only country-to-country marathon, Jim Ralston is stepping aside following a 14-year run as its race director. Under Ralston’s stewardship the race, now called the Niagara Falls International Marathon (NFIM), has enjoyed steady growth in popularity as a destination race for runners drawn by the idea of starting a race in the United States and ending it in Canada—near the brink of the iconic Canadian Horseshoe Falls, no less.