The “most interesting”, the “most beautiful”, indisputably one of the fastest courses, yet surrounded by Venetian charm 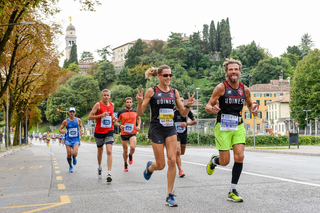 Udine is a small town in the north east of Italy halfway between the sea and the mountains. It lies in a strategic position between Austria and Slovenia and just an hour away from Venice.

Characterised by squares and palaces with Venetian charm it is surmounted by Castle Hill and its park, the view from which extends 360 degrees from the peaks of the Dolomites to the Adriatic Sea. The Udine Half Marathon starts and finishes among the stunning historical streets of the city at the foot of Castle Hill.

Organised by the Associazione Maratonina Udinese with the aim of promoting Udine and the Friuli Venezia Giulia region through sport, it is one of the fastest half marathons in the world. The course is totally flat and many internationally renowned athletes choose Udine to improve their times. From its first edition back in 2000 the Udine International Half Marathon was the first half marathon in Italy and the second in the world for timing.

In 2007 Udine hosted the second edition of the World Road Running Championships during which the Dutch champion Lornah Kiplagat set a world record of 1:06:25 which remained unbeaten for almost 10 years.

In 2015 it was the only race in Italy featured in an ESPN America documentary about the most interesting running events in the world. Since 2016 it has been included among the 100 most beautiful races in the world by the American website My Best Runs.

Now in its 21st edition Udine International Half Marathon has become one of the most important sporting events in the region of Friuli Venezia Giulia. It involves as many people as possible in a weekend dedicated to sport which attracts over 4,000 participants from the region, from all over Italy and from abroad.

The program includes two days of activities designed to appeal to everyone, including sporting conferences, thematic exhibitions and several associated events.

Saturday morning starts with a schools’ relay race. In the afternoon there is the children’s “MiniRun” and a race for runners accompanied by their dogs called the “Corsa con il Cane”. Sports Saturday ends with the introduction of the top runners and with a time trial run on the steep slopes of Castle Hill at sunset.

Sunday is the day of the main event, the competitive 21km race, but also of “StraUdine” – an 8km fun run open to everybody from children to grandparents.

There is something for everyone. We await you in Udine on 26–27 September 2020 for this great sports gathering and invite you to stay on afterwards in our beautiful region, to visit our historical villages and to enjoy the spectacular naturalistic views that Friuli Venezia Giulia offers.