Runners are happier in Chuncheon 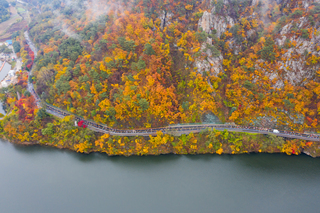 Have you ever imagined running alongside a lake looking at a mountain covered with trees bearing infinitely variegated autumn leaves?

Every year more than 25,000 runners participate in the Marathon and an associated 10km. The course is around Ui-am Lake, located in the middle of Chuncheon. Runners can enjoy the colourful autumn sights as they run along Hoban Street near Gongjicheon Park.

The race was launched in 1946 as ‘The Chosunilbo Shortened Marathon’ to commemorate the 10th anniversary of Ki-Jung Son’s victory in the Marathon at the 1936 Berlin Olympic Games. He won in an Olympic record time of 2:29:19, while his compatriot Seung-Ryoung Nam came in third. These were great feats that elevated spirits for all Koreans.

‘The Chosunilbo Shortened Marathon’ was upgraded to a full-length marathon in 1970. The venue was changed from Seoul to Chuncheon in 1991. The race is held every October and has led the popularisation of the marathon by being the first to introduce electronic timing and pacemakers for amateur runners.

Participants who complete the full course ten times or more are inducted into the “Hall of Fame” each year – so far 3448 people have been so honoured for their steadfast interest and love for the race and its participants.

The organisers have made strenuous efforts to increase runners’ satisfaction. They have renewed the souvenir T-shirt annually and it has been praised for practicality and design. Moreover, they have upgraded commemorative medals since 2018.

Another pride of the race is its safety. Ambulances are on standby every 5km. AEDs and emergency services are also assigned every kilometre to ensure the safety of the participants. Nearly 2000 volunteers are stationed throughout the course to help runners complete the race. The volunteers comprise middle- and high-school students and come from local civic groups in Chuncheon. Organisers have developed the race into a regional festival in which local residents voluntarily stage and participate in cheering shows throughout the route.

Chuncheon, just 62km northeast of Seoul, is easily accessible and can be reached on race day by express buses, trains, and subway trains in less than an hour. Foreign runners can stay in Seoul and come directly to the race. But there are so many things to enjoy and eat here – foods such as spicy stir-fried chicken and makguksu (a buckwheat noodle salad) – that runners are happier in Chuncheon..

Chuncheon, Gangwon-do is famous as the “city of lakes” because it has so many of them – including Ui-am Lake and So-yang Lake. Nami Island is a famous tourist spot in Chuncheon which receives more than three million visitors annually. There is plenty to see and do here.