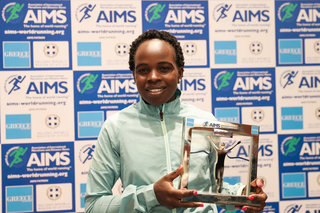 The world running organisation the Association of International Marathons and Distance Races (AIMS) is delighted to recognise the Kenyan athlete Peres Jepchirchir with the AIMS World Record Award.

Peres broke the Half Marathon World Record, setting a time of 1:05:06 at the Ras al Khaimah Half Marathon on 10 February 2017. Peres has since taken time away from the sport to start a family, recently returning to competition. While the record was broken a month later by her compatriot Joyciline Jepkosgei, AIMS has a proud tradition of recognising every World Record since 1985.

AIMS President Paco Borao commented: “We are delighted to see Peres’ achievement recognised with the AIMS World Record Award. Everyone at AIMS, our members and sponsors would like to pass on their congratulations.”

Peres Jepchirchir commented: “I am very pleased to be presented with this award. Being back at the Ras Al Khaimah Half Marathon brings back so many special memories for me. I would like to thank AIMS for presenting me with this trophy on behalf of their members and sponsors around the world.”

Nathan Clayton, Race Director of the Ras al Khaimah Half Marathon commented: “We are very pleased to welcome Peres back to the Ras Al Khaimah Half Marathon where she set the World Record. It was a very special moment in the history of our event. We would like to thank AIMS for helping make this presentation possible.”

Haitham Mattar, CEO of Ras Al Khaimah Tourism Development Authority said: “We are delighted to see how the Ras Al Khaimah Half Marathon secured its place as one of the most sought after half marathons in the world, with professional athletes such as Peres Jepchirchir setting their best results. We look forward to welcoming our guests to enjoy both a world class racing experience and the hospitality that Ras Al Khaimah has to offer.”