Fun in the forest 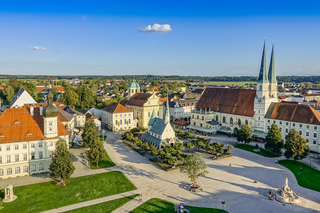 Altötting is a small Bavarian town of 12,000 inhabitants, located between Munich and Salzburg. It was previously known only for its churches and pilgrimage sites which attract up to a million people each year.

But in September 1992, almost unnoticed, 57 people ran through the nearby forest in the first ‘halbmarathon Altötting’. From that small beginning the race has grown into an event which has made the town known to runners all over the world.

In Celtic times Altötting was probably already an important cultural centre and a place of pilgrimage. People have been making pilgrimages to Altötting for around 1200 years.

Even though the Altötting Half Marathon, with 2500–3000 participants, is still small compared to other famous races it is the quality of the race which makes it special.

Major marathon winners – such as Joyce Chepchumba and Irina Mikitenko – have run in Altötting. It wouldn’t have been for the money but for the fast course and the personal connections. It is possibly the fastest “nature” course in the world with course records of 1:01:39 for the men and 1:08:38 for the women, despite the forest roads.

The Altötting Half Marathon was established from the outset with the ambition of making it a top-quality international race through the vast (around 65km²) local forest. After nearly three decades there is no doubt that this goal has been achieved.

The roads are paved only for the first 3km and the final 2km. The course is very flat. On hot days the forest shade affords cooler temperatures while on stormy days the trees block the wind.

Altötting half marathon is a ‘green-run’ – not because it is in the forest but because it offers free transportation to the race from anywhere in the region. Runners from Munich or Salzburg can travel to and from the race free of charge and pick up their registration pack directly at the station. The organisation doesn’t use glass bottles or tins; all waste is separated and recycled. All electricity, including for hot water, is completely powered by renewable energy.

Free child care facilities allow both parents to participate in the race. There are the other usual free services offered such as a pasta meal, massage, a secure bag drop and even a free guided city tour – all included in the registration fee. Bands and animation on the course encourage the runners over the first and last kilometre.

Apart from the half marathon there is also a 6km run/walk/skate and a 1.1km AIMS children’s run.
Finishers in all distances receive a specially-modelled medal at the finish line. This year the medal is formed as a gingerbread heart (“Altötting – Heart of Bavaria”) and includes an USB stick. Participants in the 21.1km and 6km races get a special present like a shirt, towel, waist-bag, backpack – or a real mobile phone.