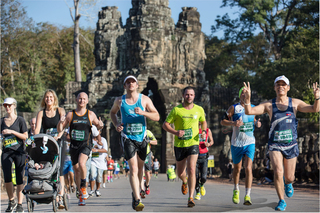 Angkor Wat International Half Marathon was established in 1996 as the first international distance running event in Cambodia. The main purpose was to raise funds to support landmine victims of the long civil war in leading normal lives. Its further purposes were to help consolidate the nation and promote friendship with all people around the world.

The course is exceptional. It runs through the ancient capital of the Khmer Empire – the Angkor Wat and Angkor Thom temples complex (dating from 12th–16th centuries).

There were only a few hundred runners in the first Half Marathon but last year there were nearly 10,000 among which 78 countries were represented. Wheelchair and disabled categories are included at both Half Marathon and 10km with these athletes starting ahead of the main field. The running Ambassador Yuko Arimori, silver medalist for Japan in the 1992 Barcelona Olympic Marathon and bronze medalist four years later in Atlanta, is the president of the ‘Hearts of Gold’ NGO in Cambodia and always joins in with the disabled athletes.

Runners experience a unique atmosphere as they pass 13 ancient temples set along the beautiful forested course in the cool of an early morning in December. Starting and finishing in front of the Angkor Wat there are three distances to choose from: 21.1km, 10km and the family fun run 3km. All runners have an opportunity to get their photo with the Angkor Wat temple (a national symbol which appears on the Cambodian flag) as background.

The Half Marathon heads south and turns alongside the moat surrounding the Angkok Wat before turning right to make a U turn near the entrance gate with 3.4km run. Runners then turn east to make a small circuit of the temple complex by passing the 10th century Kravan temple and turn left after 11km at the ancient pool of Sras Srang and Banteay Kdey temple. Returning to the west the course passes by the Victory Gate of Angkor Thom at 16km and the temples of Takeo, Taprohm, Taney, Thaomanon, Chausey Tevada in Angkor Thom. These covered an area of nine square kilometres. In the centre is King Jayavarman VII’s state temple, the Bayon, but just before reaching it, runners pass by the 350m-long ‘Terrace of Elephants.’ This was used as a platform for King Jayavarman VII to view the victorious army returning from the battlefield. Runners exit Angkor Thom by the South Gate where they have 1.5km left to run to reach the finishing line in front of the Angkor Wat temple.

See the latest news from Angkor Wat International Half Marathon