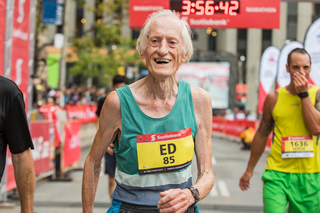 Although he was an accomplished British club runner in school and at university Whitlock put the sport on hold while he embarked on an engineering career in Canada. Much later in life he became the first septuagenarian to run under three hours with a 70+ world marathon record of 2:59:10 at the 2003 Scotiabank Toronto Waterfront Marathon, an event to which he became particularly attached.

Alan Brookes, the race director of the Toronto event, enjoyed a longstanding friendship with Whitlock.

“We are deeply saddened to learn of the passing of Ed Whitlock, The Master. The Legend. This is an enormous loss to Canada and the global running community. Somehow we thought Ed would just go on setting records forever… He defined our Scotiabank Toronto Waterfront Marathon. He will always be a vital part of the identity and spirit of the race. ‘Don’t limit yourself,’ was one of Ed’s key messages, and it was one we latched onto. It gave us the vision and the inspiration of what STWM could become. His indomitable spirit, his love of racing, his modesty and inspiration will be with us always.”

“I don’t consider myself to be an inspiring person,” Whitlock had said. “I am not one to stand up on the stage and say ‘you all can do this.’” He was an inspiration to millions around the world, albeit a reluctant one.