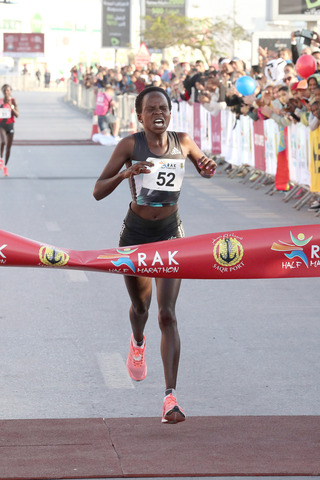 Jepchirchir, who finished in 1:05:06, shaved three seconds off the time her compatriot Florence Kiplagat set in Barcelona two years ago. Fully recovered from a bout of pneumonia at the end of 2016 the 23-year old, 4th in RAK last year, also broke the world record for 20km (mixed race) with 61:40 — 14 seconds faster than the mark set by Kiplagat in Barcelona.

In the men’s race World Half Marathon runner-up Bedan Karoki surged to victory over the last 3km after having made much of the running in the second half of the race once the pacemakers had stepped aside. Behind him rising star Yigrem Demelash broke his personal best by 29 seconds.