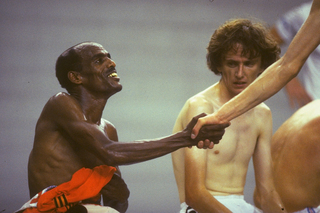 24 Aug 1979: Miruts Yifter of Ethiopia and Africa shakes hands with a fellow competitor after a race at the IAAF World Cup at the Olympic Stadium in Montreal, Canada. \ Mandatory Credit: Tony Duffy/Allsport
Photo: Tony Duffy
© This content is subject to copyright.

Miruts Yifter, who won gold medals in the 5000m and 10,000m at the 1980 Moscow Olympics, died on 22 December 2016 in a Toronto hospital. He was thought to be 72 but his birthdate, most often cited as 15 May 1944, has also been given as 1 January 1938. He had been suffering from respiratory problems after having suffered a collapsed lung.

Yifter was one of the pioneers of Ethiopian success at distance running but it was not until late in his career that he enjoyed his greatest triumph at the 1980 Moscow Olympics. Commentators nicknamed him “Yifter the Shifter” for the way he could change pace repeatedly during a race and demoralise the opposition. Like others after him he trained specifically to perfect a last-lap finishing kick. He described how he unleashed it at the Moscow Olympics in a 2004 interview:

“I listened to my opponents until there were five laps to go. Then I decided. The tension started at the bell but before they could go, I made my move. 300m is the ideal – not too late, not too early.”

In the 5000m he was boxed in as they entered the last lap but his young protegee Mohamed Kedir (who went on to become world cross-country champion in 1982) stepped aside to allow Yifter to come through. Kedir had won bronze in the 10000m but after moving aside to let Yifter through he fell and finished last.

Yifter had previously run eight years earlier in the 1972 Munich Olympics. He won a bronze medal at 10,000m but controversially failed to show for the 5000m final. He claimed that national coaches had kept him on the warm-up track too long for him to meet the requirements of the call room procedures. When he returned to Ethiopia this criticism was labelled ‘treasonous’ by the Government of the Emperor Haile Selassie and he was imprisoned for three months.

He missed the 1976 Olympics in Montreal through the African boycott of those Games. Before him Olympic success for Ethiopia had come exclusively in the Marathon with victories from Abebe Bikila in 1960 and 1964 and Mamo Wolde in 1968. Alongside them Yifter inspired the next generation of Ethiopian runners — including Haile Gebrselassie.

“Miruts was everything to me and my athletics career,” Gebreselassie said. “When I started running, I just wanted to be like him. He is the reason for who I am now and for what I have achieved.”

But Haile was then an unknown athletic aspirant. In 1998 Yifter, despite being from the same ethnic region as the Prime Minister and governing party, protested that he was accused of being too close to the previous regime, and sought asylum in Canada.

Yifter won asylum in Canada and had lived there since 1998 until his death on 22 December.