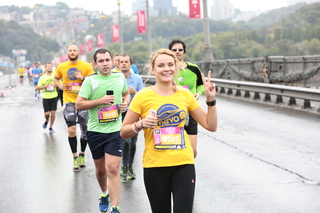 The Ukrainian capital of Kyiv, with its 2.8 million citizens, is the eighth largest city in Europe. It is also one of the most beautiful and ancient cities in Eastern Europe, founded 1500 years ago.

The new route for the seventh edition of the Kyiv Marathon — the largest running event of the year in Ukraine — threads its way through Kyiv as a one-lap course. It starts at Khreshchatyk Street and runs along the Kyiv-Pechersk Lavra passing by the National Museum of the History of Ukraine in World War II, the Paton Bridge, the Desiatynna Church, St. Michael’s Cathedral and other sights of Kyiv. Kyiv is a very open and accessible city — not least due to the efforts of title sponsor Wizzair (offering nonstop flights from London, Hamburg, Cologne and Budapest among other places).

The Kyiv City administration has agreed street closures in a delicate balance between the interests of the runners and the needs of the city’s transportation network. The agreement recognises the growing importance of running culture in Ukraine.

Founder of the Kyiv International Marathon Dmytro Chernitsky commented: “The new single-lap course presents a challenge for the organisers and for the city but, thanks to the cooperation of all services and departments, runners will be able to enjoy the competition and spectators the sporting spectacle. Year by year more foreign runners will be coming to our race. This year we joined AIMS and this gives us a platform to project our race throughout Europe and the world.

Special attention paid to the medical credentials of runners entered for the full Marathon distance and the relay 2 x Half Marathon distance relay. On race day the Marathon pulls in about 500 volunteers of which 250 assist as marshals on the route. Medical support will consist of 22 ambulances, 60 volunteers from the Red Cross, 10 crews of the organisation “MotoHelp” and two medical centres equipped with defilibrators.

Thousands of runners are mobilising in Ukraine as participants in the new running culture. They will enjoy a very privileged view of the city on 9 October. You are invited to join them and feel the incredible energy of running as it infects and energises the city.