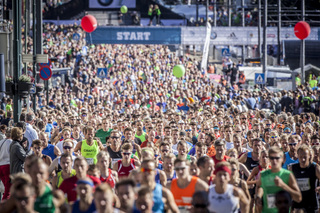 If you thought that you have to be an elite runner to take part in a marathon you can think again. The BMW Oslo Marathon offers sporting challenges for all accompanied by a resounding roar from the public as more than 25,000 people meet on the streets of the Norwegian capital to soak up the impromptu cultural performances and cheer on their loved ones.

The BMW Oslo Marathon is the biggest and most inclusive marathon in Norway and caters to all different fitness levels with distances of 3km, 10km, 21.1km, 42.2km and 73km; the ‘ultra’ event being called the Oslo Triple. “It is an inclusive event where almost anyone will find a challenge to suit their abilities. Participants range from professionals to those recently rehabilitated from illness or injury”, says communications manager Cathrine Stensaker.

The Oslo Marathon starts and finishes in front of the Town Hall facing the beautiful Oslo Fjord. Marathon runners complete two laps of the half marathon course. The route passes through several of Oslo’s varying districts and goes past many of the city’s most well-known sights like Frogner, Aker Brygge and the Opera House. From many places along the course runners get a view of the Oslo Fjord with its boats and harbours.

This year’s events begin on 16 September with a 3km evening run as a warm-up to the big day on 17 September. While the different distances attract thousands of runners many thousands more flock to be part of the joyous atmosphere created by the entertainment, singing and dancing along the route. “Ballet dancers from the National Opera, top DJs and cheerleaders join forces to create a fantastic buzz,” says Stensaker. “Last year we had 40 different performances scattered across all Oslo and we are expecting more of them this year”.