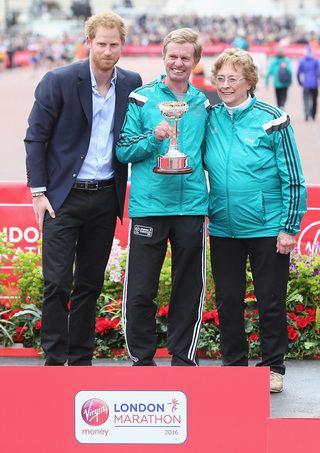 Hugh Jones, Secretary of AIMS since 1996, received the Disley Lifetime Achievement Award in recognition of his outstanding contribution to marathon running in the United Kingdom over several decades.

Hugh, a Londoner himself, was the first British winner of the London men’s title in 1982 (2:09:24), has been actively involved with the event ever since, and is the AIMS/IAAF Measurer responsible for its certification. The honour first given last year to Paula Radcliffe, world record holder and three times previous winner at London, was initiated by John Disley, co-founder of the London Marathon in 1981 who died aged 87 in February 2016.

HRH Prince Harry, as Patron of the London Marathon Charitable Trust, and Mrs Sylvia Disley, John’s widow and an Olympian herself who won bronze in the 4×100m relay at the 1952 Olympics, are pictured jointly presenting the Award to Hugh after the London Marathon on 24th April 2016.