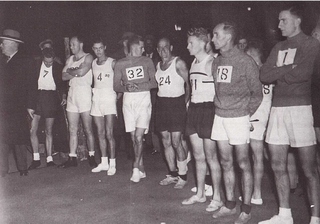 Under arc lights in the pre-dawn of 1 June 2014 15000 runners massed in front of Pieter­maritz­burg City Hall. Of these about 10% had travelled from 69 foreign countries for the privilege of participating in the 89th edition of the Comrades Marathon.

They had descended upon South Africa to take part in ‘the world’s greatest footrace’ (in 2010 the Guinness Book of World Records endorsed the Comrades Marathon as the world’s biggest ultra-marathon with 14,343 finishers). The 2015 race has already attracted 22,611 entrants — surpassed only by the Millennium race, which 24,500 entered.

Things have not always been on such a grand scale. If ever there was a ‘little acorn’ from which a tall oak would grow then the vision of a World War I veteran Vic Clapham was that acorn. He wanted to establish a living memorial to those who had fought and died alongside him in ‘The Great War’. Not only to remember them but also to commemorate the strength of the human spirit and its ability to triumph over adversity and hardship.

Recalling the heat, thirst and physical demands of his East African wartime experience he fixed on the idea of a 56 mile (90km) footrace along a tortuous route between the towns of Pietermaritzburg and Durban. The authorities argued that the challenge would be too arduous but Clapham remembered how he and his comrades had been drafted off the street, given a rifle and 60lb (27kg) pack and sent marching all over Africa.

He argued that for many years, from 18 April 1846, a Zulu runner had delivered the Natal Witness, a weekly newspaper, on foot from Pietermaritzburg to Durban. The runner (whose name escapes the historical record), would leave Pietermaritzburg at 14.00 on Saturdays and return on Wednesdays, departing from Durban at 10.00. He would carry papers to subscribers on the down run to Durban and letters to Pietermaritzburg residents on the up run, completing each journey in approximately 12 hours, come rain or shine.

It took Clapham three years from his initial approach in 1919 to eventually persuade local athletics authorities and the League of Comrades of the Great War for permission to stage his memorial race: they allocated £1 with which to organize it.

On 24 May 1921 34 runners lined up outside Pietermaritzburg City Hall to start what would be become the world’s oldest and largest ultra-marathon and one of South Africa’s greatest sporting events.

Refreshments were made available at several hotels along the route. The road was dusty and runners had to pass through several gates and at least one stream. The only tarred section of road was within Durban. Bill Rowan won in a time of 8:59 which local media hailed as “one of the grandest accomplishments yet made in the annals of South African Sport”, although it remains the slowest winning time yet. Fifteen others finished within the 12-hour time limit.

The following year the direction of the race was reversed, and this tradition has continued, with a “Down Run” from Pietermaritzburg to Durban one year and an “Up Run” from Durban to Pietermaritzburg the next. The first race had fired the public imagination and 114 runners entered, including Arthur Newton, a 39-year-old farmer, who was destined to become the first of the Comrades Marathon Greats. Newton won the next four Comrades Marathons, finished second in 1926 and in 1927, at the age of 44, won his fifth title before retiring from Comrades and going overseas to compete. Living in England “Greatheart Newton” set numerous world records and gained international acclaim as “the father of long-distance running”.

Today Comrades is recognised worldwide as the single most inclusive sporting event in South Africa, welcoming runners of all standards, races and nationalities, but prior to 1975 South African Sports rules prescribed that only white men could enter.

In the early years runners relied mostly upon family and friends to ‘second’ or support them throughout the race. As time went on and numbers rose seconding had to be stopped for safety reasons and organised refreshment stations were introduced in the 1970s. Today there are over 50 refreshment stations positioned roughly a mile apart along the entire race route which, together with marshals, officials and medical, physiotherapy and emergency personnel, cater for all conceivable needs of participants.

Although the race did attract some international runners in the early years it was in 1994 that it really opened up. Following the ground-breaking elections which sealed South Africa’s re-entry into the international community Comrades was won by three-time New York City Marathon winner Alberto Salazar. Other international elite runners, such as Leonid Shvetsov, Maria Bak and the Nurgalieva twins followed. The heightened profile of the race attracted an ever-growing flow of recreational tourist runners from all over the world, some of whom became so enthused by their reception that they became ‘ambassadors’ for the event in their home countries.

The Comrades Marathon is one rich in tradition, from the spontaneous singing of a migrant mine labourers’ folksong Shosholoza, the playing Vangelis’ Chariots of Fire and the traditional Cock-crow at the Start, to the honour of earning one’s Green Number (a race number assigned in perpetuity) by running ten Comrades Marathons. It is the tradition and ethos of this race that has led to its pre-eminence amongst ultra-marathons worldwide. The Comrades Marathon is so much more than a race; it has become a lifestyle, a legend in its own time and a South African institution.

Commercialisation, sponsorship, live television and modern media coverage have made the Comrades aspirational to the mainstream population: it has been said that every able-bodied South African should run the race at least once in his or her lifetime.

Little could Vic Clapham have imagined the stature and esteem associated with the Comrades Marathon today. But there is little doubt that he would have been overwhelmed to see how the origins of the race have never been forgotten; how on race day the whole nation celebrates mankind’s triumph over adversity in the spirit of the Comrades Marathon. True to his wishes the Comrades Marathon has been staged annually (with the exception of 1941–1945) for 90 years in the memory of all protagonists in all conflicts in which South Africans have made sacrifices.