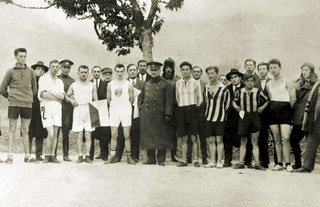 In the summer of 1924 Vojtech Braun Bukovský went to see the Olympic Games in Paris. He was a sports enthusiast, organizer and journalist from Košice and returned home thrilled by the drama of the Olympic Marathon.

He enthusiastically channelled his efforts towards organizing a marathon in Košice and just a few weeks later, on 28 October 1924 (the 6th anniversary of the establishment of Czechoslovakia) eight brave pioneers lined up for the start.

From just below the ruins of Turňa Castle they set off towards Košice on what was a then still unknown adventure.

The first winner, local runner Karol Halla, tried defending his title another nine times but the increasing level of competition was against him. The second edition already attracted an international line-up, and the winner’s laurels from the third race were carried off to Germany around the neck of Paul Hempel. He was sent by the Charlottenburg Sports Club which, 50 years later, was the driving force behind the founding of the Berlin Marathon.

The Marathon quickly made itself at home in Eastern Slovakia, and started getting a response from the rest of the world as well. One memorable year was 1931, when the 20-year-old Argentinian newcomer Juan Carlos Zabala shocked everyone with his course record of 2:33:19. Many doubting voices were raised, but were silenced a year later by Zabala’s victory at the Olympic Games in Los Angeles.

There was never any real doubt about performances achieved in Košice. Since 1924 the course has been re-measured every year, in accordance with the rules, to ensure it conforms to the now standard distance of 42,195m. This has not always been as self-evident as it might seem: as late as 1956 the Boston Marathon was run over a course of only 40.6 km.

Not even the turmoil of war could stop the Marathon, and its continuity was preserved. The early snowfall in 1946 served as a kind of omen that the era of the Northerners was beginning. In the 10 years following that snowfall, runners from Norway, Sweden and Finland won a total of eight times, with the Swede Thomas Nilsson setting a new course record of 2:22:06 in 1956.

During that period the Košice Marathon had a superb reputation in Scandinavia. “May Boston forgive us, but the greatest marathon contests in the world are being played out in Košice,” wrote the daily Göteborg Posten. The leader of the Swedish team announced: “If I could, I would declare the Košice Marathon the official championships of Europe – it is unofficially so today in any case.”

In 1959 the Soviet Union’s Sergey Popov greatly improved the course record with a time of 2:17:45, and topped the world marathon rankings that year. Košice was also the number one marathon in the world in terms of the number of participants. It may seem laughable in comparison with today’s mass marathon starts, but in 1946 and 1947 Košice had the most runners finishing the race anywhere in the world: 74 in both years. Nowhere in the world could outdo Košice in this regard in 1951 either, when there were 69 finishers.

In 1960 the Košice Marathon acquired its own monument: a 3.5-metre high, bronze statue of a marathon runner, standing on a plinth bearing the names of the winners. Just one year later the name of one of the greatest Marathon runners of all time was added to the list. He came, he saw, he conquered: Abebe Bikila, the Olympic champion in Rome and later in Tokyo as well. The population of the city at that time was no more than 80,000, but nearly 30,000 people were crammed into the stadium to see the finish, and several thousands more lined the course.

The next few Marathons were graced with other outstanding names: world record-holder, American Leonard ‘Buddy’ Edelen won in 1963, and brilliant runners from Great Britain and the Common­wealth took turns lining up at the start, such as Bill Adcocks, John Farrington, Derek Clayton and Ron Hill.

To compete in Košice meant first bettering a quite demanding qualification time. This became history in 1980, when the Košice Marathon was opened to women as well. For many years the women’s event was ruled by the German Christa Vahlensieck, who in 1977 had set the world record of 2:34:48 in Berlin. Between 1981 and 1988 she won the Košice Marathon five times. Her fellow German, double Olympic winner Waldemar Cierpinski, tried repeatedly for victory in Košice but none of his five starts here brought him that honour. He started his marathon career with his debut in Košice in 1974 and completed it here as well with his start in 1985.

Less than two months before the Velvet Revolution in 1989 it looked like the Marathon was anticipating the great social changes to come. The traditional course dating from 1926, going out to Seňa and back, was replaced with a city circuit. This attracted the attention of the whole world in 1997, when the IAAF World Half Marathon Championships were held in Košice. Records were broken, as three men finished under the hour in the same race for the first time. The Kenyans dominated, with the titles taken by Shem Kororia and Tegla Loroupe. Hours later the organizers were faced with the challenge of starting the Marathon that same afternoon. They succeeded with that as well.

Two years later Košice hosted the 12th AIMS World Congress, getting the chance to present its rich marathon history and organizational abilities once again. At that time, and many times since, Košice was declared the place continually organizing the oldest marathon in Europe. Only Boston has a longer tradition. These two marathons have two common winners: the Swede Karl Leanderson (Boston 1949, Košice 1948 and 1950) and the Belgian Aurel Vandenriessche (Boston 1963 and 1964, Košice 1965).

Today the Košice Marathon is a colourful festival of sport and fun, attracting roughly 10,000 participants from all over the world. All those running around the extensive historical centre of the first city in Europe to acquire its own coat of arms (from King Louis the Great in 1369) must surely admire the Gothic St. Elizabeth’s Cathedral dating from the 14th century and a great many other architectural gems. It was thanks to this heritage and the city’s programme of creative transformation that Košice gained the title of European Capital of Culture for the year 2013.

The Košice Marathon is attractive not only due to its tradition, precise organization and olden-day charm of the city, but also for the fast course it offers. This has hardly changed since the World Championships in 1997, and the course records of 2:07:01 and 2:27:47 bear testimony to its flat and fast nature, along with the many personal bests which runners set in Košice.

If you ask runners what they see as exceptional in the Košice Marathon, they often say that it is the unusual atmosphere, streets full of runners and spectators, and a mutual positive energy which recharges everyone present. This image reflects the 90 year-long marathon phenomenon in this city. The people understand this marathon; they live with it, and are rightly proud of it.