Start and finish right in the heart of Osaka city 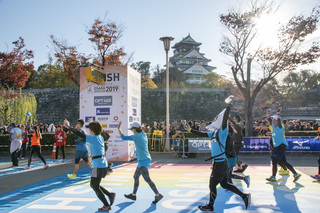 Feel the excitement of running through Midosuji, the main street of Osaka.

By combining these two races that have each separately garnered attention from around the world the Osaka Marathon will have the competitiveness of an elite marathon with the world’s top runners and, at the same time, give amateur runners the opportunity and satisfaction of achieving their personal goals as well.

Since it started in 2011 the Osaka Marathon has implemented its own charity programme. The race is the largest charity marathon in Japan with over 30,000 runners participating.

The word “Omotenashi” means “hospitality” and the people of “Naniwa” (Osaka) are some of the most hospitable and warm-hearted in Japan with huge crowds gathering along the road to enthusiastically cheer on the runners.

The race features many water stations and aid stations along the course including the “Maido Aid Station” that awaits runners during the later stages of the race. This aid station reflects the city of “kuidaore” (“eat till you drop”) and offers many Osaka specialties and confections from the stores in the local shopping district.

On the day before the race a Happy Morning Run and a Fun Run for parents and children take place right near Osaka Castle. The Osaka Marathon is one of the biggest annual events for Japanese runners, participants coming from overseas and the local people of Osaka.

In Japan it was always considered extremely difficult to hold a race in the middle of a major city but in 2019 the Osaka Marathon was able to achieve what is referred to as a “Central Finish”, with the finish line located right in the heart of the city.

The start and finish venue are set at Osaka Castle Park. The Castle is loved as a symbol of Osaka and it became a motif for the logo of AIMS World Congress to be held in Osaka in the days before the 2023 race.

The race allows participants to run through many of the city’s famous historical and tourist sites such as Midosuji (the main street), Kyocera Dome Osaka (a multi-purpose dome), Osaka Harukasu (Japan’s tallest building) and the Osaka Business Park.

As the Osaka Marathon strives to evolve into a world class race, it looks to provide an unforgettable experience for everyone.

We would like to welcome you to Osaka to come and experience this very special race first-hand.