What is Global Running Day? 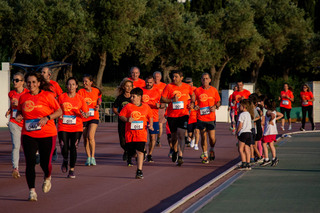 A ‘National Running Day’ was started in the United States in 2009 but the idea soon jumped national boundaries.

New York City Mayor Bill de Blasio declared the 1 June date to be Global Running Day in the City of New York. 2014 Boston Marathon winner Meb Keflezighi led a group run from the Boston Run Base and the Atlanta Track Club organized a “run around the clock” event, where at least one person from the Atlanta metro area would be running every hour of Global Running Day.

In 2017 Global Running Day attracted the support of international organisations like AIMS and World Athletics (then IAAF). National federations and, more significantly, the organisers of distance races all over the world started to offer events on the day specifically aiming to attract new runners. Running clubs and stores started to get involved but at the heart of the project was the idea of individuals making a pledge to run a certain distance in a place of their choosing.

The Million Kid Run started as part of the first (2016) edition of Global Running Day. The objective that year was to get more than a million kids from around the world to participate, whether in formally organised or impromptu events. The focus was on making fitness fun, and inspiring kids to embrace running as a way to remain healthy. 672,030 youths took part in 2016.

In 2020 and 2021 Global Running Day, in common with most races at the time, became a ‘virtual’ event due to the Covid pandemic and the fear of infection at live events. The transition was seamless for events like the Million Kid Run which were set up in the same way: to ask people to pledge to run a named distance at any time on Global Running Day in a location of their choice.

This year the live venues returned. Runners were motivated to visit the Global Running Day website (www.globalrunningday.org) and take the Pledge. That could mean being part of a virtual race or selecting a live event from one of many different locations listed.

In New York itself, the birthplace of the movement, Global Running Day kicked off with an ‘Open Run’. Open Runs are free, community-led fun runs and walks, For Global Running Day a special one was held in Morningside Park for people of all ages and abilities. Since Open Run launched in 2015 there have been more than 18,000 participants city-wide. In the afternoon nearly 1000 kids from the Rising New York Road Runners program across the five boroughs came to Icahn Stadium for fun running and fitness activities.

In Valencia, aka the ‘City of Running’, Global Running Day celebrated the passion for running by bringing people together on the first such occasion since the pandemic. Close to 500 people went out to run together in the Turia river-bed gardens that run through the centre of the city. This contributed to the greatest number of daily users of the 5km training circuit in 2022, with more than 3100.

In Athens ‘the birthplace of the Marathon’, the Minister of Sports Mr. Lefteris Avgenakis ran with the team of Greece’s leading marathon runner Maria Polyzou. The event took place at the Olympic Stadium and the General Manager of OAKA (the Olympic Complex) Mr. Konstantinos Halioris also participated. All the runners who took part were raising food relief for the people of Ukraine.

Maybe you missed it this time around – if so be sure to put the date in your diary for next year: 1 June 2023.