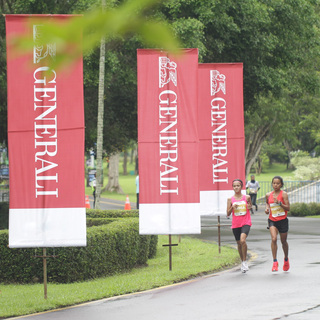 With an average temperature of between 20–25ºC in December, the city of Malaga invites you to take part in its great running event.

Recognised as among the four best marathons in Spain, the Generali Maraton Malaga has increased its number of participants with every edition.

That was difficult to do in 2021 because of the restrictions due to the Covid-19 pandemic. A large proportion of the foreign runners were missing because of travel restrictions, but the marathon managed to reinvent itself, as more Spanish and Andalusian than ever, to register a record number of runners. Of 8700 in total 4700 were in the Half Marathon and 4000 in the Marathon. The Generali Maratón Málaga was one of the few marathons that managed to grow their numbers in 2021.

There are many reasons which explain why the Marathon has had such success.

International recognition has increased with greater participation of elite runners.

The goodies in the bag: Generali Maratón Málaga offers all runners, both 21km and 42km runners, a premium windbreaker as a gift for registering for the race.

The city is well-prepared to receive large numbers of visitors. Malaga has an international airport, the third most important in the Iberian peninsula, as well as a high-speed railway station, making it very easy to reach from the other main Spanish cities. It also has an extensive hotel capacity to accommodate runners, friends and family during their stay in the city.

Malaga receives millions of tourists throughout the year, with December being the perfect month to visit. Its historical downtown is an amalgam of the cultures that have passed through the region, with Phoenician, Arab and Roman heritage. There are many large museums including the Picasso Museum and the Pompidou Museum. Added to this is the exquisite Andalusian and Mediterranean cuisine of the city and its spectacular year-round climate.

Malaga offers the possibility of running the marathon or the half marathon distance, with different goals and a well-signposted route.

The route is key: it’s a flat course with much of its length along the seashore. The final few kilometres are through the historical downtown of the city.

Generali Maratón Málaga has been awarded the “Málaga Cómo Te Quiero” seal of approval for its positive impact on the city, with a beneficial environmental, social and economic legacy.

The Marathon expo will change location, moving to a spectacular setting in the Port of Malaga. Centrally located and close to the historic centre of the city, it will offer runners the opportunity to pick up their runner’s bag and meet other runners in the most popular area of the city.

To encourage the runners the Generali Maratón Málaga is organising a cheering competition throughout the 42 kilometres of the race. The runners themselves will choose the winning group for the “You Rock Malaga” prize.

The Generali Maratón Málaga offers you all this – and we will be pleased to welcome you to Malaga.