Caribbean race attracts runners from all over the world 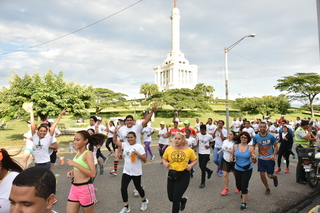 Since 2016 the Maratón Monumental Primer Santiago de América has stood out in offering runners an event of international standards.

There is a choice of three certified distances: Marathon, Half Marathon and 10km. The event has the approval of the foremost running institutions in the world and large cash prizes are awarded for the first five places in each of the competitive distances. For the sixth consecutive year the race will be held at the Jardines del Gran Teatro del Cibao, Santiago.

Every year we continue to reinvent ourselves with the consistent purpose of making each version a unique experience full of emotions, adrenaline and of joy for lovers of this discipline.

The Dominican Republic is a country known for its biodiversity. Thanks to its position in the Caribbean there is a pleasant climate throughout the year, varying from warm to cooler in the winter season. The country’s landscapes range between mountainous and coastal areas; it has the highest peak and the largest lake in the Caribbean.

Santiago de los Caballeros is also known as the “Heart City” or “Capital of Cibao” and is the second most important city in the country. It has a population of 1.5 million inhabitants. Its main economic resources are tobacco, the production of goods in Free Zones, services, and agro-industries. The annual average temperature is 25˚C (77°F).

Our race has the only single-circuit marathon route in the country, which is attractive for those looking to run a route with the best landscapes and scenic points. Our country offers a very pleasant climate for the month of November, which allows participants to run with greater comfort and better performance.

The race routes include tourist points in the city such as the Monument of the Heroes of the Restoration, Santiago Central Park, the City’s Historic Centre, the Pontificia Universidad Católica Madre y Maestra, the Metropolitan Hospital of Santiago and the Great Theatre of the Cibao, among other sights.

Our race is the only one in the country that is internationally certified. Our last edition attracted 1400 runners: 169 in the marathon, 444 in the half marathon and 787 in the 10km race. The event has grown through the years thanks to the support of the public, the city, the sponsors and volunteers. Outstanding runners have come to compete, such as the Dominican national record holder Álvaro Abreu. The biggest names among the international participants in the marathon have been the Ethiopian runners Amare Shewarge Alene and Gezahegn Abera Hunde who hold the women’s and men’s course records.

The race has allowed us the opportunity to share with runners from all over the world In 2021 we had participants from Mexico, United States, Honduras, Nicaragua, Costa Rica, Colombia, Venezuela, Peru, Brazil, Haiti, Puerto Rico, Spain, France, Belgium, Holland, Poland, Hungary, Italy, Ethiopia, Kenya, Russia and South Korea.

Prizes are by category. Overall male and female winners receive USD 8000. The winners at each distance are awarded along with the first Dominicans to reach the finish line, the first citizens of Santiago and according to age groups.

Our mission is to make Santiago de los Caballeros into a standard bearer for international marathons, creating a sports culture of healthy living for the city’s inhabitants and its visitors.