Magic in the air 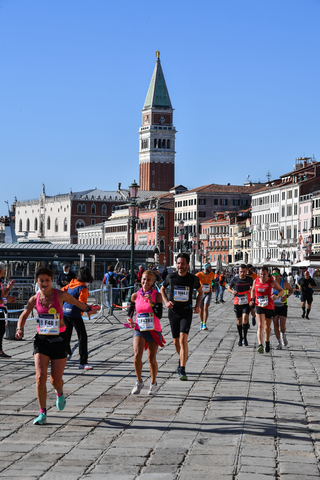 Every runner, at least once in their lifetime, should experience the magic of running the Venicemarathon, where fatigue dissolves in the face of the eternal beauty of this city that lies on water and where time seems to have stopped. The Venicemarathon is one of the most fascinating marathons in the world. Every kilometre is rich in art, history and culture making it an incomparable experience.

The race starts from in front the of Villa Pisani in Stresa, a mansion that over the centuries has hosted doges, kings and emperors. On the occasion of the marathon it opens its gates to accommodate the runners up until the moment they enter the starting corrals.

The first part of the route runs along the Riviera del Brenta with its eighteenth-century villas built by Venetian nobles. Runners then pass through Marghera and continue to the centre of Mestre. The race gives exclusive passage within the brand-new multimedia museum and then runs for over 2km through San Giuliano Park. The Park overlooks the lagoon and leads on to Venice via the Ponte della Libertà.

The athletes run along the panoramic Fondamenta delle Zattere, admiring Giudecca Island and skimming the majestic Basilica of Santa Maria della Salute up to the Punta della Dogana. From here runners use the 166m-long pontoon bridge, specially set up for the event, which connects the Punta della Dogana to the Royal Gardens of San Marco. The floating surface evokes the sensation of running on water.

Runners make their entrance into St. Mark’s Square by passing between the columns of Saints Mark and Tòdaro, crossing what was once the monumental gateway to the Serenissima. The ‘lap of honor’, in the shadow of the Campanile and St. Mark’s Basilica, is one of the most anticipated moments of the marathon. The athletes then return to the basin along the Doge’s Palace and cross the Ponte della Paglia from which they can admire the Bridge of Sighs. The course continues along the Riva degli Schiavoni, skirting the San Marco basin, and reaches the finish line in Riva Sette Martiri. The “Giardini della Biennale” is nearby, which hosts the various pavilions of the biennial exhibition of Art and Architecture and is where all the post-race services are set up.

This year a new distance will be added to the Marathon and 10km. The Venice Half Marathon will start from Piazza Ferretto, the cosy square in the heart of Mestre, and will then join the marathon route.

The VM10km will start from the San Giuliano Park and will cover the final enchanting 10km of the Venicemarathon route. The finish line for all three distances will be Riva Sette Martiri, which will welcome the succession of arriving runners uninterruptedly from 9 in the morning until 4 in the afternoon.

Thousands of enthusiasts from all over the world come to Venice every year to run its marathon (or a shorter distance) and discover the charm of this magical city.

See the latest news from Venicemarathon