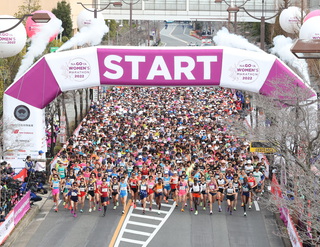 The sight of the women runners filling the wide city streets in the Nagoya Women’s Marathon on 13 March impressed both local and global audiences with a comeback of one of the largest women’s sports festivals.

The runners’ strength, perseverance, smiles and even tears provided a reminder of the power of sport and the hope it inspires.

The Marathon took place against a background of races being cancelled elsewhere in Japan. The Lake Saroma Ultramarathon, usually held in late June, was called off on 29 March – two weeks after Nagoya had been held without generating any infections.

Already the largest women’s marathon in the world this year Nagoya also became the highest-paying Marathon in the world with its increased first-place prize of USD 250,000 (EUR 237,000). That the largest prize in marathon running would be given to a woman rather than a man gathered worldwide attention. The proud winner was Ruth Chepngetich, who dominated the competition to win in the time of 2:17:18 – the sixth-fastest ever run and the second-fastest in the women-only marathon category.

Throughout the Covid-19 pandemic Nagoya has managed to put on the event each year while still placing top priority on safety and security.

In 2020 precautions and regulations in place only allowed for an elite race with 110 participants while 4704 ‘domestic’ (Japan-based) runners were able to participate in 2021. This year, a total of 8698 elite and amateur runners ran the race while the surge in the Omicron variant was still going on. A global virtual race took place alongside the live event.

The Omicron variant of coronavirus arrived relatively late in Japan but from January 2022 it caused a rapid increase in infections. As the number of new cases rose quickly to a record high level the government brought restrictions into force and called for citizens’ cooperation to contain the virus. Although the outbreak peaked in February and then slowly began to decline the number of cases remained high. Even in early March, when the race was scheduled, there were a lot of uncertainties as to whether it could go ahead as planned. In general people in Japan are very cautious about the risk of infection and many mass event organisers, including those of marathon races, had been forced to cancel or reduce the size of their events.

To hold a mass participation race safely under such circumstances the organisers of the Nagoya Women’s Marathon took all possible measures against the spread of infection. The Covid-19 Control Office was again established within the Organising Committee with medical professionals, local authorities, and the Japan Association of Athletics Federations. Their job was to formulate and implement the infection control plan. A key part of this was a new measure for 2022: setting up free PCR testing stations at the event sites and requiring all runners to present a negative result before the race start.

For non-Japanese nationals the Government had continued its policy of suspending new arrivals into Japan but a small number of foreign-based elite athletes were able to join the race.

Exceptions were made for some elite runners with the requirement that they would be quarantined for a week at a special facility under the organiser’s responsibility. No non-elite runners living outside Japan were allowed to enter the country so could not participate in the race in Nagoya. The original field of 22,000 was reduced to 8698. For those who were unable to run the in-person race, the Nagoya Women’s Online Marathon 2022 was held as an alternative, available through a running app. All finishers, including those of the virtual race, received the finisher prizes including the event’s exclusive Tiffany & Co. pendant and New Balance T-shirt.

Below are some of the key infection control measures taken at this year’s event.

Protocols for All
- Mask wearing at all times (except for runners during competition).
- Hand sanitisation and body temperature check (entry to the event sites refused for anyone with a fever of 37.5°C or higher).
- Submission of health and temperature records from 7 days prior to race day via an app or web form.

For Elite Athletes
- Daily PCR testing during the period of the event.
- One week’s quarantine at a designated facility was required for foreign-based elite athletes after arrival in Japan.

For Runners
- Free PCR testing was provided for runners at the event sites from 3 days prior to race day.
- A negative PCR test result within 72 hours of the race start had to be presented to enter the event site on race day.
- If a runner’s body temperature was below 37.5°C but above 37°C, an antigen test was conducted to confirm the negative result before the race start.
- Mask wearing was mandatory before the start.
- Social distancing was required at the starting blocks (more than 1m between runners).
- Food was individually packaged at refreshment stations and hand sanitisation required before picking up.
- Hand sanitisation and face masks were distributed right after the finish.

For Volunteers
- Face masks, face shields, and portable alcohol disinfectant were provided for all volunteers, as well as additional equipment depending on where they were assigned.

At the Marathon Expo
- Booth setting, flow design, and entry restriction were implemented to avoid the ‘Three Cs’:
The ‘Three Cs’ are the high-risk situations of COVID-19 transmission defined by the Ministry of Health, Labour and Welfare of Japan:
- Crowded places with poor ventilation
- Close-contact settings
- Confined spaces.
- All visitors were required to provide their names, addresses, and contact information via an admission form at the entrance (for contact tracing).