Through the coral sea 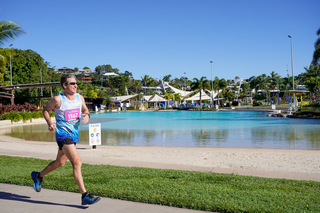 Airlie Beach in North Queensland is the jumping off point to the 74 Whitsunday Islands and the Great Barrier Reef.

You can travel from Airlie Beach by ferry, yacht, helicopter or sea plane to see the famous Whitehaven Beach, Hill Inlet or Heart Reef.

Airlie Beach and the Whitsunday Islands are covered by several well-maintained trails through National Parks’ rain forests. All of them are suitable for running or hiking with striking views over the islands.

The Tassal Group Airlie Beach Marathon Festival provides a great opportunity to combine your love for running and nature by experiencing a pristine marine and fauna environment after an enjoyable marathon or half marathon.

There are several events in the festival and they are all held on the same course, on footpaths and boardwalks, along the Airlie Beach foreshore. The route takes you through the Coral Sea and Port of Airlie Marinas with expansive views out to the Whitsunday Islands.

The Tassal Group Airlie Beach Marathon Festival was first run in 2013 with a half marathon as the main race. In 2021, the eighth year, the festival was held in Covid-free North Queensland without any adverse effects.

The festival takes place in July each year during Australia’s tropical winter. The weather at this time of the year, with mild, sunny days, is ideal for running and swimming (and snorkelling and diving).

The marathon was introduced in 2017 and the first officially measured AIMS/World Athletics certified course was run in 2021. It’s a new race on the world calendar and provides you with a ‘boutique’ marathon experience running in a small field with 50 other runners.

The marathon is run on a four-lap course and the other races are slowly added as the day progresses. Even though it is a small field there’s a lot of company along the route and the “marathon fairies” accompany anyone requiring some extra support.

The Airlie Beach Foreshore Magic Mile is run along the beachfront on the Saturday afternoon. The marathon, half marathon, 10km, 5km, 5km Corporate Challenge, 2km Primary School Challenge and 1km kids’ race all take place on the Sunday morning.

The male winner was Caleb Noble, an elite triathlon athlete from the Sunshine Coast in Queensland who broke the previous record by eight minutes with a time of 2:31:50. Local Whitsunday Running Club member Liv Compton won the women’s marathon in a time of 3:37:32, a 10-minute improvement in the course record.

The half marathon was also won in record time by Airlie Beach runner Daniel McDonnell in 1:16:05. Townsville runner Liz Maguire won the half marathon for the third time in 1:37:41, having previously won in 2014 and 2015.

Each competitor receives a running vest in their race pack and a medal when they cross the finish line. Both items are themed to reflect the natural environment of the Whitsundays by depicting a local fauna or flora item.

Previous vests and medals have depicted a Coral Trout (a local delicacy) and a Humpback Whale (they migrate to the area to calve each year between July and December).

The Event Manager and President of the Whitsunday Running Club, Tim McQuoid-Mason said: “It is a great couple of days of racing in a unique boutique event with plenty of options to explore the Whitsundays and the Great Barrier Reef afterwards.”