RAK Half Marathon is back 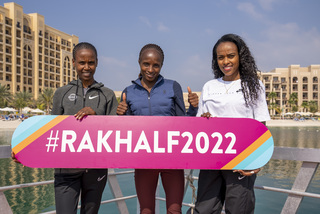 Runners are excited to be back for the 15th edition of the Ras Al Khaimah Half Marathon, which had the fastest women’s podium ever in 2020 with an average top-three time of 64:58.

On Sunday at 07.00 (local time) the men’s and women’s races will start together.

From Kenya, Abel Kipchumba the winner of the 2021 Valencia Half Marathon and Alexander Mutiso, second place in 2020 here at the RAK Half Marathon, will be the toughest opponents.

From Europe the German national Amanal Petros (60:09 PB and NR) is chasing for Julien Wanders’ European record of 59:13.

The women’s race will feature three stars of track & field and road running. Ethiopia’s Ababel Yeshaneh is a former world half marathon record holder with 64:31 (which is the RAK course record from 2020). Hellen Obiri, with a track background, started her new road running career with a personal best of 64:51. Then Genzebe Dibaba, 1500m world record holder, has run the best half marathon debut of all-time with 65:18. So it will be an epic battle between these legends of track & field. From UK we will see Eilish McColgan (67:48) who is not so far behind Paula Radcliffe’s national record of 66:47.