Dramatic changes in distance running since 1982 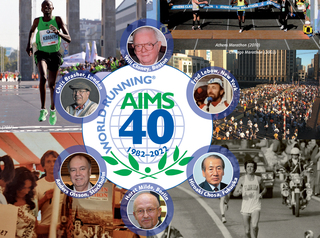 The ‘Association of International Marathons’ was officially founded at a meeting held in London on 6–7 May 1982 but the idea of such an association had been gathering momentum for some time.

Mass participation marathons run on the streets of the World’s major capitals were a recent innovation. They had previously been confined to laps of public parks or quiet country back-roads which could easily accommodate the modest fields of 100–200 committed enthusiasts. Only Boston, the grandfather of Marathons, had exceeded 1000 runners before the New York Marathon was run through the city’s five boroughs for the American Bicentennial in 1976.

This was what broke the mould. In a startling transformation space was made available for thousands of runners to flood the city centre on Marathon day, bringing a celebratory atmosphere with them. As New York’s numbers grew rapidly in the next few years other races sprang up explicitly modelled on the example that had been set. By 1980 there was a growing band of organisers widely scattered throughout the world.

The Honolulu Marathon had been started as a small event in 1973 with 150 runners but it was so successful that by 1976 there were 1400 finishers – close behind New York. Many organisers were already travelling to observe and learn from each other’s events. At a meeting in Honolulu in December 1980 a group calling itself the ‘International Marathon Race Directors’ (IMRD) was established which met again at the New York Marathon in October 1981.

The subject of discussion at the time centred around a ‘World Circuit’ of races advocated by Serge Arsenault of the Montreal Marathon incorporating an individual marathon championship for elite runners. The arrangements discussed had close similarities with what was eventually adopted by the ‘World Marathon Majors’ 25 years later. At a second meeting in Honolulu on 11 December 1981 the IMRD additionally laid plans to formally constitute the group as the Association of International Marathons which is what was done at the meeting in London.

There were 29 founding members who were paid up at the meeting and 19 of them are still members today – although in some cases they have radically transformed (for example, the two elite races in Tokyo, Tokyo Women’s Marathon and Tokyo Men’s Marathon have since been in effect absorbed by the Tokyo Marathon).

Those present approved a constitution and elected Will Cloney of the BAA Boston Marathon as the first AIMS President. Members attending this ‘Establishing Congress’ also laid down a succinct list of three main objectives: (i) to foster and promote running throughout the world; (ii) to work with IAAF (now World Athletics) on all matters relating to international Marathons; and (iii) to exchange information, knowledge and expertise among members of the Association.

Immediately after enacting the business essential to setting up the Association there followed a technical discussion on the organisation and measurement of international marathons. This emphasised the central importance of ensuring that Marathons were the correct distance. At the time there was already a reliable and affordable method of measurement being used but under objectives (i) and (iii) it became AIMS’ primary mission to spread the word so that the ‘calibrated bicycle’ method of measurement eventually became universally accepted and applied.

This was just as well, as the world governing body responsible for enforcement of rules, the International Amateur Athletics Federation (IAAF, later to become World Athletics) was slow in seeing the potential of big-city mass-participation races. Their purpose was geared towards the elite competitive end of the sport and the new races were often seen as potentially damaging to traditional championship races.

The arbitrary but ‘magical’ distance of the Marathon had been formalised as 42195m as far back as 1924. In championship races position counted for more than time in and there had never been a concerted effort to ensure courses were accurate enough to bear comparison between different locations. The ‘calibrated bicycle’ method of measurement was enshrined in the IAAF rule book in the 1980s but it was not until 1995, at a meeting with IAAF instigated by AIMS, that an administrative system was set up by which measurements could be policed. Since that time AIMS has maintained its measurement mission in co-operation with IAAF.

IAAF resisted the recognition of world records at the marathon distance on the grounds that courses were not comparable. AIMS proposed a maximum allowable overall ’drop’ of the course and straight-line separation of start and finish so that possible assistance afforded by gravity or a potential tailwind was limited. From 2003 this became the basis on which what had been called ‘World Bests’ have since then been credited as World Records.

AIMS’ original membership remained stable, with only slight growth in the early years, but with the publication of the first AIMS yearbook in 1985 the dynamic had begun to change. The yearbook featured a race calendar. This in itself was a recognition that AIMS’ reach had to extend beyond its member race organisations to connect with the runners themselves. To this end the A5-format booklet also carried advertisements for member races and a total of 200,000 copies were circulated by member events to their runners.

Mass participation marathons were already becoming a significant market within the sports tourism sector. In 1986 AIMS membership, now approaching 50 races, was extended to include races over distances other than the marathon. The New York City Marathon in particular was attracting over 10,000 foreign runners each year – often accompanied by supporters and staying a for a full week. With runners bringing so much money in it was no wonder that more and more cities became interested in setting up races, often promoting them through their national or regional tourist offices.

More recently races like French Riviera Nice-Cannes, Athens and Valencia all experienced very strong growth spurts when they tapped into the running travel market. In many places, before the travel restrictions brought about through the covid-19 pandemic damped it down, it was the main driver of growth in the running market as runners were in continuous pursuit of new challenges in more distant and exotic locations.

The AIMS Yearbook kept track with this trend, as membership neared 100 races, by increasing frequency of publication to two editions a year in 1992. It was then re-launched as Distance Running and progressed through three editions to become (by 2003) a quarterly magazine of 84 pages in A4 format and full colour. Each edition showcased a selection of the (by then) 170 AIMS member races. No other publication could offer such a wide range of races with such a vast geographical spread. It proved an effective platform from which member races could promote themselves – and increasingly so as AIMS membership grew steadily to reach a pre-Covid peak of 470 in 2019.

The steady progress in membership numbers, in technological application and in economic impact has wrought dramatic changes to what was, within living memory, a sport for a small minority of eccentrics. But some of the greatest moments in the last 40 years since AIMS was founded were when in the words of Chris Brasher, one of the founding fathers of AIMS, the marathon could “show to mankind that, on occasions, they can be united”.

These moments may have been in celebration – after the fall of the Berlin Wall, of the Boston Marathon centenary race or the 2500th anniversary of the Battle of Marathon. More tellingly perhaps it was when such solidarity lent morale and support to the victims of tragedy. After the atrocities perpetrated in New York and Washington in 2001, in Madrid in 2004 and in Mumbai in 2008 the Marathons which followed in those cities proved cathartic and helped people to find their voice again. When the Boston Marathon itself became a target for bombing in 2013 the race proved an effective means of rallying the entire city to become “Boston Strong”.