On Sunday 7 November 2021 the New York City Marathon celebrated its 50th anniversary. Berlin Marathon founder Horst Milde pays tribute where it is due 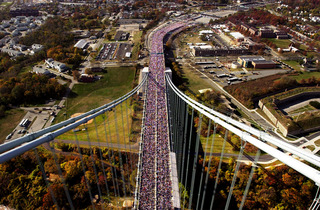 381358 05: Runners make their way across the Verrazano Narrows Bridge in New York November 5, 2000 at the start of the New York City Marathon. Over 30,000 participants ran in this year''s event. (Photo by Chris Hondros/Newsmakers)
Photo: Chris Hondros

NYC Marathon sent out a lot of press releases in the run-up to its 2021 race. New York was teeming with activities, programs and side events for the 50th anniversary race but it struck me that there was almost nothing about the race’s initiator and co-founder, Fred Lebow.

I did catch site of an article by Hailey Eber, who wrote in the New York Post “The first New York City Marathon was nothing like Sunday’s big race, but the two have one important thing in common: Fred Lebow”.

I am among those many race organisers who are deeply indebted to Fred Lebow. We followed his example and organised our own races and marathons in many parts of the world. He was the one who sensed that running could have a future.

Lebow was a Romanian-born Holocaust survivor who worked in Manhattan’s garment district. He organized the first New York City Marathon in 1970. It was a modest event: 126 men and one woman lined up at the start and then ran several laps around Central Park.

According to Richard O’Brien in “New York City Marathon: 50 Years Running“ (Skyhorse Publishing) “The New York City Marathon as we know it didn’t really take off until 1976. At that time an official and local runner named George Spitz suggested expanding the race to all five boroughs. Lebow thought that was too ambitious.

‘“A race like that could cost $15,000 – where are we going to get that kind of money?“ Lebow demanded. But Spitz persisted and got then-Manhattan Borough President Percy Sutton on board. Sutton found a local businessman who raised $25,000 for the event, and things took off.’

In Berlin it was similar: the race was launched in 1974 as the 1st Berlin People’s Marathon with the course mainly in the Grunewald Forest. There were 286 runners entered of which 244 finished. In 1981 Berlin followed New York’s example and moved the race downtown (West Berlin) with the start at the Reichstag and the finish on Kurfürstendamm.

“1976, that was the starting point,“ writes George Hirsch, former publisher of Runner’s World, in the introduction to O’Brien’s book. About 2000 people started the race and 1,549 finished – surpassing Boston’s numbers to become the largest marathon in the world. “We all knew we had an instant success – one that would become an annual institution and the best day in the life of New York City. Everyone agreed that Lebow had done a great job.”

I met Fred at the Stockholm Marathon in 1981 when I was trying to convince the Berlin police director Heinz Ernst to allow us to organize a marathon in the centre of Berlin. I introduced myself to Fred and his advice to me, while handing over the revered NYC T-shirt, was “Don’t get confused, don’t give up trying to convince the authorities and whoever else in Berlin to bring running to the city centre for the people.“ He helped me to persuade the police that runners also have the right to use Berlin’s streets.

Fred ran the NYC Marathon for the first and only time in 1992. He was 60 years old and undergoing follow-up treatment for a brain tumour. Grete Waitz, his good friend and nine-time NYC marathon winner, ran the entire distance alongside him. He and Grete were cheered on at every turn by crowds of New Yorkers who recognized and clearly appreciated this cause for which he had done so much: this great annual celebration of urban life and spirit.

With his New York City Marathon, Fred Lebow gave his city a sporting flagship that is admired worldwide. The running community remembers him with great appreciation.