The city of Valencia has in recent years hosted performances previously seen as the preserve of a few traditionally prestigious races. How did Valencia manage to get in on the act? 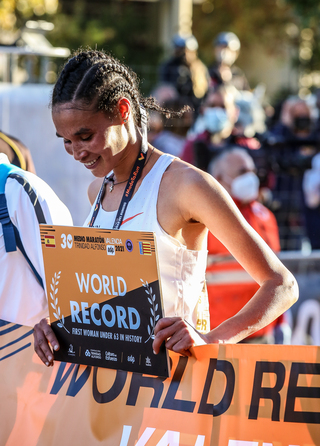 In early 1980, thanks to a visionary running enthusiast called Miguel Pellicer, the Sociedad Deportiva Correcaminos Club was born. Alongside it the Maratón Popular de Valencia was founded and the first edition was run on 29 March 1981 - the same day as the first London Marathon.

Although Valencia is far smaller than Madrid and Barcelona, the two biggest cities in Spain, it has two main advantages when it comes to the Marathon: its climate and its topography. On typical winter mornings the temperature is between 8–13ºC. The Marathon course ranges between a 3m minimum altitude and a 13m maximum. It could be considered a paradise for fast running.

These advantages have always been there for all those marathons run every year since 1981, and since 1991 also for a 20km race which a few years later became a half-marathon. So what changed in recent years to make the races in Valencia such prolific sources of fast times?

The election of Paco Borao, representing the Valencia Marathon, as President of AIMS in 2010 marked an initial step. It immediately occurred to the city administrators that this could present an opportunity to promote Valencia through sport, in this case a mass participation sport like the Marathon. With this in mind they proposed a joint organising team of the local administration and Correcaminos to give the strong push necessary to set up the best possible event.

Among the changes geared towards making this happen was to move the race dates from February to October/November, to better attract European runners, and to move the Start and Finish lines into the ‘City of Arts and Sciences’. This futuristic environment, rated among the 12 ‘Treasures of Spain’, provides a stage from which to project the races in a highly effective way, with the last 100m giving the appearance that competitors are running on water. This was all done under the agreement between the Correcaminos club and the Valencia administration.

Valencia City began to express interest in actively promoting running tourism as the ‘Ciudad del Running’. Registrations were already beginning to increase and interest was heightened by the impressive start and finish locations and the realisation that all comers were starting to record faster times than elsewhere, and faster than previously in Valencia.

The stage was set quickly – the 2011 race was held in November – but the necessary dynamic was not yet in place to attract the world’s fastest. It came through the city administration linking together with a private entity the Fundación Trinidad Alfonso (FTA) and its president Juan Roig.

Roig was watching National TV news at home and the commentator remarked that the Valencia Marathon was like New York in starting on a bridge and finishing at the Museum of Arts and Sciences. It sparked his interest such that he ‘fell in love’ with the race and enquired about the Foundation becoming the event sponsor. Paco Borao recalls: “We reached the agreement which formally started with the Half-Marathon – at that time it had no major sponsor. It was only in 2014, when the previous agreement expired, that the Foundation extended its sponsorship to the Marathon.” With the City and the Foundation fully signed up to the project the ‘glue’ holding it together was a modest running club: Correcaminos.

“I always tried to convince everybody that the perfect balance is having a big number of mass registrations to support a good elite field, and have a good elite field to motivate the popular runners,” said Borao.

Valentijn Trouw, of the athlete management agency Global Sports Communications, agreed: “I feel a great energy and spirit in Valencia to make running important. This counts both for the elite athletes and the masses. That Valencia is flat and has a friendly weather environment helps but it is the sincere will and dedication to serving the athletes, of all different levels, which is the starting point. It is what is most important to succeeding in the way that Valencia is at the moment.”

Juan Botella, with responsibility for assembling the elite field, gives insight from another angle: “We choose the elite field 13 months before the event, on the basis of a ‘dream list’ which would excite fans into getting up to watch the race on TV. We mix and match track and road runners for maximum impact. Then we go to the athlete managers and have to compete with the money of the Marathon Majors to get what we want. In the end we always get five or six of the athletes we dream of.

“Then we maintain weekly contact with their managers. The runners we choose are our team. This is very important, because we sign men and women, not just names. We also bring in promising youngsters even if they have never left Kenya and Ethiopia.

“Through the MyBest42 Program, we add elite or sub-elite runners who are among the best in their country, even if they are not capable of winning our races; it is about building a total marathon with many groups, many objectives and many nationalities. We are proud that the winner in 2020 ran 2:03:00 but maybe even more so that there were 50 runners from 25 countries who ran under 2:15. I think it’s an exciting and effective mix.

“In last four years, four half marathon World Records have been broken in Valencia (three female, one male), and it was never exactly the same course. We never stop polishing and improving. We dream of becoming the Everest of Marathons in this humble but beloved town called Valencia.”

Currently both men’s and women’s half marathon world records were set in Valencia – but how long before it extends to the Marathon as well? The men’s course record needs to improve by 82 seconds to also become a world record, and it has done so by more than that in the previous two years. Expectations have been raised but so too has the inner belief that expectations will be met.