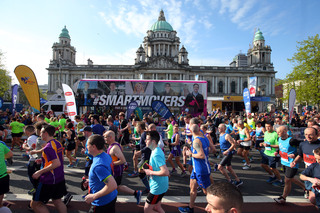 The Belfast City Marathon first launched in 1982 as the running boom peaked in the early 1980s. Guinness was the title sponsor helping to set up the first event of its kind in the city with 3021 runners completing a two-lap course.

As the novelty of marathon running started to fade in the late 1980s the event organisers introduced new events, including the Team Relay in 1989. This consisted of teams of two to five people with each person running a ‘leg’ of the marathon route. The 8-mile walk and fun run events were introduced in 1997 and the Belfast City Marathon became the biggest participatory sporting event in Northern Ireland. Traditionally taking place on the Bank Holiday Monday (first Monday of May) each year it developed into an all-inclusive event for the whole family and helped to generate over $1.5 million annually for local charities.

The marathon route changed over the years to ensure that all sections of the city were included. A major re-vamp in 2019 extended the course to take in more of the city and its historic sites. The event also moved to a Sunday which was widely supported by participants and communities across the city. Many local churches have embraced Marathon Sunday and provide refreshments and entertainment – some with brass bands and choirs – along the marathon route.

The course winds its way through an array of fantastic tourist sites. These include the Stormont Estate Parliament Buildings, dating back to 1755, and Belfast City Hall dating from 1906 (Durban’s City Hall in South Africa was built four years later and is almost a replica of Belfast’s). There are two iconic sculptures on the route: The Salmon of Knowledge – a printed ceramic mosaic including texts and images relating to the history of Belfast, and the Rise Sculpture representing a new sun rising to celebrate a new chapter in the history of Belfast.

Despite a history of civil unrest in Belfast the City Marathon has endured throughout and has become a community-wide event for all. It was cancelled only once, in 2020, due to the COVID-19 pandemic when a virtual option was hosted instead. The 2021 edition, postponed from May, took place in October incorporating the NI and Ulster Marathon Championship, along with the 2021 National Seniors Marathon Championships.

In 2022 the Mash Direct Belfast City Marathon returns to its traditional May Bank Holiday weekend (Sunday 1 May), starting from Stormont Estate and finishing at Ormeau Park. Over 16,000 participants are expected in the 40th Anniversary event including Marathon and wheelchair races, the team relay and the 8-mile walk.

The event has sustained itself through community support with help from over 300 volunteers each year. Schools, universities, businesses, and churches all get involved to deliver a successful event.

Belfast is renowned for its crowds who cheer the participants on. Locals from all sides of the city come together on Marathon Day each year to support the thousands of runners and walkers as they weave their way through the city.

Experience the very best of Belfast by signing up for the 40th anniversary Mash Direct Belfast City Marathon.