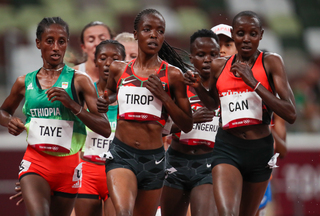 TOKYO, JAPAN - JULY 30: Ejgayehu Taye of Team Ethiopia, Agnes Tirop of Kenya and Yasemin Can of Turkey in the heats of the Team womens 5000m during the Athletics event on Day 7 of the Team Tokyo 2020 Olympic Games at the Olympic Stadium on July 30, 2021 Tokyo, Japan. (Photo by Roger Sedres/Gallo Images/Getty Images)
Photo: Gallo Images
© 2021 Getty Images

Agnes Tirop, who only one month before had set a world record for 10km in a women-only road race, was found dead at her home in Iten, Kenya on 13 October, with a knife wound to her neck. Athletics Kenya said that she was allegedly killed by her husband.

On 12 September Tirop had run 30:01 for 10km on a road circuit in Germany. She broke the previous women-only record of 30:29 set by Asmae Leghzaoui (MAR) back in 2002. The 25-year old had finished fourth in the 5000m at the Tokyo Olympics on 2 August. She had started her career by becoming the second youngest ever winner of the World Cross-Country Championships back in 2015 at the age of 19. She went on to twice win bronze medals at 10,000m both in the World Championships of 2017 in London and 2019 in Doha.

Tirop’s husband Ibrahim Rotich was arrested 800km away in Mombasa on 14 October while allegedly attempting to flee the country. Two other arrests were made and charges brought.