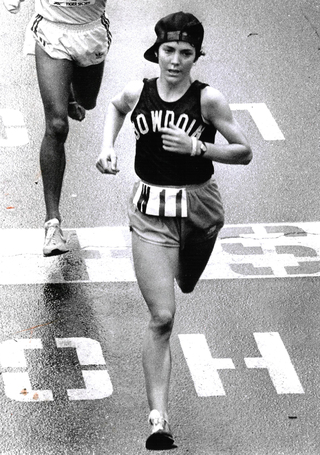 Joan Ullyot (nee Lamb, 1 July 1940 – 18 June 2021) was an American physician, author, and runner. She was one of the key figures in successfully lobbying for a women's marathon in the Olympic Games.

Ullyot herself won 10 marathons, including the masters’ category at the Boston Marathon in 1984. She participated in all three of the Women’s International Marathon championships (1974, 1976 and 1979) held in Waldniel, Germany, placing sixth in 1976.

Until she reached 30 Ullyot showed no interest in distance running. Throughout her time as an undergraduate at Wellesley College – famous as the cheerleading highlight of the Boston Marathon – and at Harvard Medical School, from which she graduated in 1966, she remained detached from the sport. Several decades later she simply said: “Girls didn’t run. I don’t know why, but they just didn’t.”.

Ullyot married Daniel Ullyot in 1965. The couple moved to California where Ullyot worked as an exercise physiologist and a project director at the Research Institute of Laboratory Medicine at the Pacific Medical Center in San Francisco

She started to run in 1970 – at first to keep fit. She only realised she had a talent for it after competing in the 1971 Bay to Breakers race. Women were at last officially accepted by the Boston Marathon in 1972, and Ullyot ran the race 10 times over the coming years.

Combining her new commitment to running with her professional interest in exercise physiology Ullyot was ideally placed as a serious commentator to campaign for full participation for women. She published “Women’s Running” in 1976. a book in which she rebutted traditional arguments that women were innately unsuited to distance running.

Women’s distance running events were not included in the Olympic programme of the time. The 800m had been added in 1960 and the 1500m in 1972 but women could not contest longer distances. In 1977 the International Olympic Committee rejected a proposal to include a 3000m event for women into the programme of the 1980 Moscow Olympics.

Meanwhile women were regularly competing in Marathons and elite performance levels were fast improving. Thrown onto on the back foot, in April 1980 the IOC program committee invited “further studies on the physiological and psychological effects of competitive marathon running on women.”

Ullyot made crucial contributions to the medical evidence submitted to the IOC in support of including a women’s Marathon in the 1984 Los Angeles Olympics. Bowing to the weight of evidence the IOC approved the proposal in February 1981. In 1984 home favourite Joan Benoit won the inaugural women’s Olympic Marathon. Former world record holder (1975–79) Jacqueline Hansen commented: “we wouldn’t have had a Joan Benoit if we hadn’t had a Joan Ullyot.”