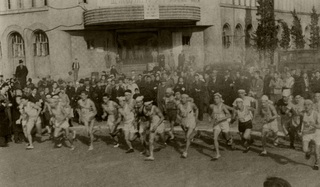 Fukuoka International Marathon, for many years the world’s foremost Marathon, held its 75th and final edition on 5 December 2021.

The Japanese Association of Athletic Federations, which was the organiser of the event, decided in March 2021 that the Fukuoka International Marathon would be discontinued due to the loss of sponsors and the high cost of producing the television broadcast.

The glory days were the 1960s through to the 1980s. The course became known as probably the fastest in the world. In 1967 the Australian Derek Clayton proved the point by running a world record time of 2:09:37 on it. The 1970s were monopolised by the big names of Marathon running at the time: Frank Shorter, Jerome Drayton, Bill Rodgers and Toshihiko Seko. In 1981 Rob de Castella set another world record of 2:08:18.

From the early 1980s other races, with elite runners racing at the head of huge waves of mass runners, were coming on the scene with Rotterdam in particular laying plausible claim to being just as favourable for setting world records. Top elite runners were now able to choose from a wider range of races and a changing offering of rewards.

Fukuoka’s response was to target a selected top-name runner and focus the pre-race publicity around them. Olympic Champions Josia Thugwane, Gezahegne Abera and Haile Gebrselassie all topped the bill at Fukuoka in the 1990s and 2000s.

Mass-participation marathons arrived late in Japan with the 2007 Tokyo Marathon accepting 25,000 entries headed by a strong elite field. This started a re-ordering of the top races in Japan in which the traditional single-sex elite events either merged with new mass participation start-ups or opened their entries up to mass runners of both sexes. A notable exception was Nagoya which remained a single-sex race but very quickly grew to be the largest women-only marathon in the world.

The mass of alternatives opening up both overseas and domestically hurt Fukuoka. The rapid rise of the Valencia Marathon in particular, which shared its race date with Fukuoka, hit hard. Then the launch of the mass-participation Fukuoka Marathon four weeks before Fukuoka International’s traditional date on the first Sunday of December further undermined the longstanding elite race’s chances of survival. A move to combine the two races in the same way Tokyo had done was resisted by the Fukuoka International organisers, and the race was history.

Brett Larner adds a personal note:
Of all the races that have gone under since I started Japan Running News Fukuoka makes me the saddest. The year I ran Fukuoka International Samuel Wanjiru won it in his debut. Not just for the true elite but for high-level amateurs across Japan and worldwide, qualifying for the Fukuoka International Marathon was a point of pride, especially hitting its A-standard and getting to start on the track with the big boys. I wore my hat from it when running a few days ago and still prize it and my post-race towel highest among the things I’ve gotten at races over the years.

Time marches on and Japan can be very slow to modernize in a lot of areas. The move to big budget mass-produced McMarathons isn’t all a bad thing, but it’s really hard not to feel that something is being lost. Small races that put an emphasis on excellence were part of what made Japan unique, and for generations they motivated the dreamers every season the same way the U.S. Olympic Trials do every four years for the majority with no chance of making an Olympic team. I’m sorry to see that there’s no longer a place for that sort of thing.