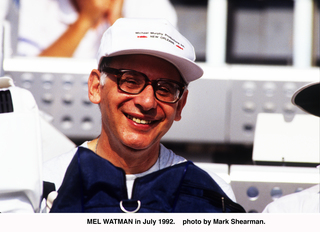 Leading athletics writer and statistician Mel Watman died of cancer on 17 September at the age of 83.

Best known for his contributions to Athletics Weekly and later Athletics International, Watman was admired by his peers and athletics enthusiasts all around the world.

He was born in London in 1938 and became an athletics fan after a school trip to the 1950 AAA [English] Championships. He chanced upon a copy of Athletics Weekly during the trip and a few years later became a contributor to the pocket-sized (A5) magazine. He trained as a journalist and set off around the world to report on major championships and interview top athletes. He joined Athletics Weekly full time in 1961, working alongside the magazine’s founder and editor, Jimmy Green. By then he had already become a founder member of the National Union of Track Statisticians.

“For the next 26 years, although working crazily long hours, I could not have been happier in my work,” Watman said. “My salary was much lower than what my Fleet Street colleagues were earning but that was more than compensated by the job satisfaction and opportunity to travel the world.”

Watman became editor of Athletics Weekly in 1968, giving increased prominence to international coverage and ensuring a more balanced treatment of men’s and women’s events. He remained editor until the late 1980s when ownership of the magazine changed.

With Randall Northam he edited a rival start-up magazine, Athletics Today but by 1993 the venture had proved unsustainable. After another change of ownership at Athletics Weekly Watman resumed his old role as a contributor although his energies were mainly directed towards making the Athletics International newsletter an essential reference source for journalists all over the world.

In recent years he was inducted into the England Athletics hall of fame and awarded the Ron Pickering Memorial Award for Services to Athletics.

Not long after covering the Tokyo Olympic Games Watman collapsed at his home in North London and was later diagnosed with an inoperable cancer of the spine, which progressed rapidly.