Peninsular half marathon defies you to not enjoy it

A world record – but there’s more to come 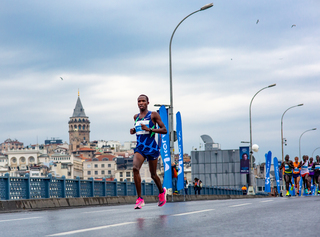 For both recreational and elite runners the race offers a unique opportunity to run the historical peninsula of Istanbul. It’s a special experience which draws runners from all over the world. The course has no altitude difference and is well suited for setting personal best times.

Among the elite this means world records are possible – and so it was proven when Kenya’s Ruth Chepngetich broke the women’s world record in the 16th N Kolay Istanbul Half Marathon on 4 April 2021 with the sensational time of 1:04:02. The race organisers beam with pride at the achievement and at Kibiwott Kandie’s performance in breaking the course record by 15 seconds with a time of 59:35.

The historic peninsula is surrounded on one side by the Sea of Marmara, the Bosporus and the Golden Horn, and bounded on the other with a rich historical landscape, giving runners no choice but to enjoy the race. The earliest settlements within the historical peninsula appeared in the 7th century B.C.

The course along the seafront is flat and fast with only three turns. It takes runners past some of Istanbul’s most precious landmarks such as the Galata Tower, the Egyptian Bazaar, Fener Greek Patriarch, Hagia Sophia, Topkapı Palace and the Blue Mosque. The beauty of the city is a very important feature of the N Kolay Istanbul Half Marathon.

The race was founded back in 1987 when there were not many half marathon races in the region. It was inaugurated by the district municipality as the “Golden Horn Half Marathon” and lasted until 1993. Then, after a 16-year hiatus, Istanbul Metropolitan Municipality organised a half marathon on 26 April 2010 with the same theme. It was intended as a one-off event for that year and nostalgically called the 8th edition of the Golden Horn Half Marathon.

The race attracted such strong interest, from both public and media, that the Municipality decided to continue with it on a bigger scale resulting in the international Istanbul Half Marathon being held on 27 April 2014. It has been held annually ever since and has become one of the most significant sporting events in Turkey.

The event also includes a 10km fun run in which runners choose a non-governmental organisation that they want to support or an issue about which they would like to raise awareness. In the 2021 edition, due to measures taken to combat the Covid-19 pandemic, entry numbers were limited to 4000 in the Half Marathon and to 2000 in the 10km supporting event. These limits were quickly reached two months prior to the race date. In the end N Kolay Istanbul Half Marathon provided happiness for 2364 finishers in the 21km and 1013 finishers in the 10km.

Istanbul Metropolitan Municipality and Spor Istanbul are happy and proud to have hosted a world record in the last edition of the race and continue working to offer more to athletes from all over the world on 27 March 2022.

See the latest news from NKolay İstanbul Half Marathon