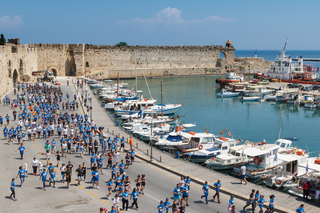 Rhodes brings to mind sunshine-filled days, blue seas, medieval castles and ancient wonders. Beyond the idyllic beach scene, Rhodes has since 2014 hosted a major Marathon and Half Marathon event.

It is an international sports event designed to make the most out of the unique cultural and natural backdrop of the island of Rhodes, aiming to challenge the athletes’ stamina while offering a warm welcome.

The Rhodes Marathon is a non-profit organization and its role has a social purpose.

Rhodes has demonstrated its love of sport since ancient times: Leonidas of Rhodes won the most Olympic medals in the history of the ancient Olympic Games. Nowadays it has again become the focus of sport offering running enthusiasts a unique seaside circular route in the northern part of the city.

Every April runners from more than 50 countries have the opportunity to run, on a flat course with spectacular views of the deep blue Aegean Sea, along the coastline and the walls of the Medieval Town of Rhodes, a UNESCO World Heritage Site.

The atmosphere, the weather, the magical journey through the beautiful old town and the personal touch of the race organisation are highly praised by the participants. The race medal represents the head of the god Apollo, god of the sun and of the island of Rhodes. Each year the race T-shirt comes courtesy of a big athletic brand sponsor. But what makes the race special is.the cosy atmosphere created by all contributors. The organisers, the volunteers, the public and the athletes combine to give the Roads to Rhodes Marathon an intimate, personal touch.

The 2019 edition of the Rhodes Marathon attracted a total of 3500 runners with more than 500 participating in Marathon and Half marathon.

The Organising Committee of the International Rhodes Marathon, giving the highest priority to the protection of individual and public health, decided to cancel the 7th edition of the race that was due to take place on 3 May 2020. The 2021 event went virtual but the 7th edition will now be run on 10 April 2022.

The upcoming event will only accept vaccinated runners or those with a recovery certificate. The race will follow all the official guidelines from the Greek health authorities that are in force at the time.

The South Aegean Region, the Municipality of Rhodes, the local Greek Athletics Federation and the nonprofit organisation Rhodes Marathon are co-organising the International Rhodes Marathon, with the support of the Rhodes Hotels Association.

All races start and finish at Eleftherias square in the centre of the city, passing by the main attractions of Rhodes on an entirely traffic free route.

A wide choice of accommodation is available in the city of Rhodes offering special rates and extra benefits for the runners, such as a special marathon breakfast.