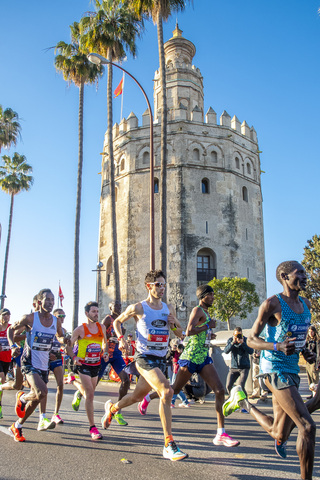 To talk about the Zurich Seville Marathon is to talk about a race full of reasons why you would want to be there.

Two of them stand out: speed and beauty. It is not just any course, but the one with the lowest cumulative elevation gain of all the marathons held in Europe. There is a difference of only 10m between the lowest and the highest point of the course. There is nothing to stop you smashing your personal best on the banks of the Guadalquivir River.

In 2020, immediately before Coronavirus started disturbing our lives, the event was on the brink of being one of the top 10 marathons in the world in terms of speed (considering the winning time). It ranks number 11, up there with the great marathons we all have in mind. 1104 runners crossed the finish line before the timing clock reached 3:00:00 – an astonishing percentage of the 13,000 runners registered.

Along with the promise of speed we should talk about beauty. The old town of Seville is one of the largest and most attractive in the Old Continent. It is difficult to take a step without running into some artistic wonder and the marathon passes by the most significant ones: Plaza de España, the Giralda and the Alcazar (which, together with the General Archive of the Indies, make up the trio of monuments listed by UNESCO as World Heritage Sites), the Torre del Oro and the Maria Luisa Park (where the start and finish line are located).

The senses are intensified by the idiosyncrasy of the Sevillian character with joy as a flag and the smile as a way of life. This marathon is a party: there are more than 20 official cheer points but this is nothing compared to the spontaneity of the locals.

Race bibs for the 2022 Marathon sold out within three months of being put on sale leaving places only for the virtual race. The good news is that the bibs for 2023 (Sunday, 19 February) will be available through the event website as soon as the current edition (on 20 February 2022) is over. Registration is still open for the new 5km which will be held the day before the marathon.