Never-cancelled race returns with strong elite fields and a total of over 35,000 runners

Istanbul carries on in 2021 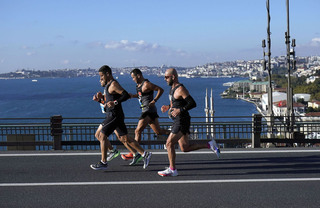 With deep elite fields and an overall total of more than 35,000 runners the 43rd edition of the N Kolay Istanbul Marathon will go ahead on 7 November.

Ethiopians Herpasa Negasa and Mamitu Daska head the start lists with personal bests of 2:03:40 and 2:21:59 respectively. The men’s defending champion and course record holder will both be returning to the Turkish metropolis, where the two winners will receive a prize purse of 35,000 USD each. The N Kolay Istanbul Marathon is an Elite Label Road Race of the international athletics federation, World Athletics.

The N Kolay Istanbul Marathon was one of very few major international road races that was never cancelled during the pandemic. A year ago the marathon did take place with an elite field and a reduced mass race of 3,000 runners. On 7 November it will look more like the marathon from 2019, when a record number of over 36,000 participants crossed over from Asia to Europe on the July 15 Martyrs Bridge in the only marathon worldwide to cover two continents. Now the race that includes a 15k and an 8k event is back to a good five figure size with an expected number of entries of over 35,000 runners. The N Kolay Istanbul Marathon will be one of the biggest road races worldwide since the start of the pandemic. As last year an extensive hygiene concept will be in place to comply with the regulations.

“We have been organizing both local and international races for athletes during the pandemic. This year we are returning to the traditional course at the N Kolay Istanbul Marathon. An exciting and competitive marathon awaits us,“ said Renay Onur, the Race Director and General Manager of the event organizer Spor Istanbul.

The current start list features ten men who have personal bests of sub 2:08. Only a few international marathons this year were able to assemble such a deep field. Ethiopia’s Herpasa Negasa is the fastest on the list with an impressive time of 2:03:40. The 28 year-old achieved this result when he was second in the Dubai Marathon in 2019, crossing the line just six seconds behind the winner of this prestigious race.

It is common with a number of African top runners at the moment that they were not able to race for a longer period due to the pandemic. While Herpasa Negasa has not competed internationally for more than two years the N Kolay Istanbul Marathon will be only the second race of the year for the other athlete who has a personal record of sub 2:05: Mekuant Ayenew of Ethiopia will travel to Turkey with a PB of 2:04:46. With this time the 30 year-old marathon specialist won the race in Sevilla in 2020. This spring he clocked 2:09:34 in Milan. Another Ethiopian with a very fast personal best is Yitayal Atnafu Zerihun who ran 2:06:21 in Dubai, where he took fifth place last year.

The quality of the elite field suggests that the course record could be under threat if weather conditions are fine on 7 November. Daniel Kibet established the current record when he won the N Kolay Istanbul Marathon two years ago with 2:09:44. The Kenyan has a personal record of 2:06:49. Kibet will return to the start line of Turkey’s most prestigious road race together with the defending champion. A year ago Kenya’s Benard Sang triumphed in Istanbul with a personal best of 2:11:49.

The women’s race will have good depth as well. Eight athletes are on the start list with PBs of sub 2:28. Mamitu Daska ran her personal record of 2:21:59 when she took the Frankfurt Marathon back in 2011. The Ethiopian, who is a former winner of the Dubai Marathon as well, has achieved half a dozen times of sub 2:26. While Mamitu Daska has not raced for almost two years Jackline Chepngeno has returned to competing internationally last month. The Kenyan was second in the Paris Half Marathon with 69:07. With her marathon PB of 2:24:38 Chepngeno is among the favorites for the N Kolay Istanbul Marathon.

Two young Ethiopians are among those who could produce a surprise in Istanbul next month. 23 year-old Medina Deme Armino was the winner of China’s Xiamen Marathon in 2020, when she clocked a personal best of 2:26:12. Fetale Tsegaye, who is 23 as well, ran her best race when she was second in Madrid with 2:27:06 in 2019.

It is unlikely that there could be an attack on the world-class course record of 2:18:35 set by Kenya’s reigning World Champion Ruth Chepngetich. But a fast race with a number of quick times is possible in Istanbul.