The ecstasy and the agony 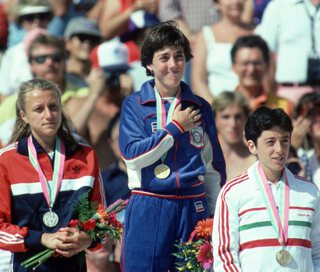 Joan Benoit of the United States stands on the top step of the podium as the national anthem is played in celebration after winning the gold medal in the first ever Women's Olympic marathon event alongside silver medalist Grete Waitz and bronze medalist Rosa Mota during the XXIII Olympic Summer Games on 5th August 1984 at the Los Angeles Memorial Coliseum in Los Angeles, California, United States. (Photo by Tony Duffy/Allsport/Getty Images)
Photo: Tony Duffy

The first ever women’s Olympic Marathon threw up two images which encapsulated both the agony and the ecstasy of the Marathon – in reverse order.

First came the moment when Joan Benoit entered the stadium with 500m left to run. In any stadium finish to a championship marathon it’s the moment when the cheer goes up from the crowd in acclamation of the about-to-be winner that is probably the most memorable moment in any marathon champion’s career. Sometimes the victory is still in doubt but that was not the case here. Benoit led by over 400m and had time to savour the moment as she completed a lap of the Coliseum track.

She half-raised her left hand in acknowledgement of the roar from the crowd but, almost hiding under the sizeable white cap she had worn from the start of the race, pressed on with her businesslike stride. She passed by the finish line out in lane five, breaking for the kerb after entering the bend and only then removed her cap and waved it at the crowd along the back straight. She hit the home straight over a full lap ahead of second-placed Grete Waitz and crossed the finish line to become the inaugural winner of the women’s Olympic Marathon. Her time remained the Olympic record for 16 years.

The 50 runners in the field, from 28 countries, had started their journey at the Santa Monica College track. A sunny day, with the temperature close to 30ºC, made for a cautious start. After six minutes of running most of the field had already exceeded the furthest distance women had ever previously run in an Olympic Games. The 1500m had only been included in the women’s Olympic programme since 1972.

Joan Benoit had another reason for caution. Five months previously she had sustained a knee injury in her build-up to the US Olympic Trials selection race. Benoit was a clear favourite, having one year earlier set a course record in the Boston Marathon of 2:22:43. This was a ‘world best’ – two minutes faster than the time run by Grete Waitz in the London Marathon just one day earlier – but not a world record as the courses were not comparable. It remained the course record in Boston until 1994.

US Olympic selections were made by sticking rigidly to a ‘first three past the post’ rule in the trial. This meant that Benoit had to run the trial only 17 days after having arthroscopic surgery. She recovered remarkably quickly, winning the trial in a modest time, but the Olympics were due three months later which allowed little time for recuperation.

In the end the awareness of Benoit’s injury may have had greater consequences for her competitors than for herself. Fifteen minutes into the Olympic Marathon she opened up a gap on her pursuers. They seemed to collectively make a decision not to chase her. Benoit had slipped the leash and was away. She gradually increased her lead so that by 30km she led by nearly two minutes.

Waitz and her compatriot Ingrid Kristiansen had become detached in Benoit’s wake but Kristiansen dropped back to leave Waitz in sole pursuit. From 30–33km she closed by 10 seconds but thereafter Benoit’s lead lessened only very slightly and, from Waitz’s perspective in pursuit, probably imperceptibly.

The day’s drama had not yet played out in the stadium. Six women dropped out, mostly suffering from symptoms of dehydration. Twenty minutes after Benoit finished 39-year-old Gabriela Andersen-Schiess, representing Switzerland, entered the stadium.

It was quickly obvious to the entire stadium crowd that she was in distress. She had missed the last water station and, in a typical indication of dehydration, was unable to keep proper balance. She swayed and staggered along the track as medical personnel rushed to her side. Andersen-Schiess responded by waving them away.

She was mentally alert enough to know that any contact with race personnel would lead to her disqualification and mentally focused enough to maintain her movement around the track. Medical officials were themselves alert to the fact that Schiess was still sweating – indicating that her condition might be better than outward appearances suggested.

The crowd were living her struggle along with her as she heaved her contorted body forward, apparently cramping in her right leg and sometimes stopping as if to steady herself. It took her almost six minutes to complete the lap of the track – but complete it she did, to finish in 37th place with a time of 2:48:42.

Gabriela “Gaby” Andersen-Schiess, born in Zürich in 1945, is 12 years older than Benoit. She was a long-distance runner who had been living in the Rocky Mountains and working as a ski instructor before being selected to represent Switzerland at the Games.

During 1983 she had won the California International Marathon in Sacremento and the Twin Cities Marathon in Minneapolis-St Paul. In Minneapolis she had faced conditions almost as torrid as those she later experienced at the Olympics. The race started at 15ºC but reached a maximum of 28ºC. While many suffered in the heat Andersen-Schiess won the race in a course record of 2:36:22.

She suffered no lasting effects from her Olympic ordeal, next day telling the New York Times that she would be competing in a 60km running and horseriding competition which, showing the same commitment and determination as she had in the Olympic Marathon, she did. But she never ran another competitive marathon.