The year of running quickly 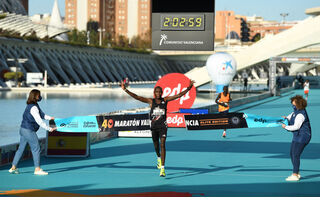 As the curtain fell on 2020 – a year most would wish to forget as quickly as possible – elite distance runners took their final bow in the Arizona desert on 20 December.

A few dozen men and women set off on a 6-lap course and 2 hours 10 minutes later seven of the men had finished. The leading woman, Sarah Hall, came in a few seconds more than 10 minutes later. Some foreign runners were in the field but this was primarily a US domestic event and the results listed an impressive set of personal-best performances. With modest prize money on offer, and Olympic trials already having put a seal on the team to run in Tokyo, this was as much as anything an example of runners feeling the need to run for their own sakes, and taking advantage of one of the scarce opportunities offered to them in 2020.

For the first nine weeks of 2020 it was business as usual for elite and mass runners alike. Then races began getting cancelled and the sport went into hibernation. Training was possible – but training without any target in sight – unless you count the ‘virtual’ races which were the best substitution on offer for real competition. It was only in September that some ‘socially distanced’ races were put on with much reduced fields. The logical solution for any organisers with big enough budgets was to shrink the field to a few dozen of the best and mount a TV spectacle as runners went for the records. So from October onwards a handful of high profile races boosted the 2020 rankings with quality times that went deep into the field: In Valencia on 6 December 30 men broke 2:10 in the marathon.

See the ranking lists for 2020 here