Field limited to 4000 with start bursts of four runners

Kipyokei and Sang triumph in Istanbul 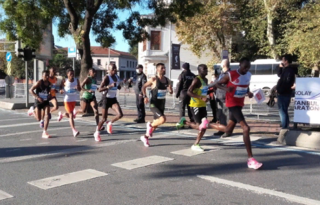 Diana Chemtai Kipyokei and fellow Kenyan Bernard Sang won the women's and men's titles at the Istanbul Marathon on 8 November in 2:22:06 and 2:11:49 respectively.

The organisers had taken anti-covid precautions to ensure runners’ safety. The start and finish area was moved to a huge open space to ensure safe distancing between runners before and after the race. The mass field, limited to 4000, was separated from the elite race with groups of four runners starting every five seconds.

The course, changed for the start and finish to both be on the European side, involved a double crossing of the Bosphorus Bridge. This resulted in many athletes, Kipyokei and Sang included, running faster in the second half than the first, in which they had to ascend to the level of the Bridge.

Four women reached halfway in 1:11:42 but soon after Kipyokei only had Hiwot Gebrekidan alongside her. They continued together for another 17km after which Kipyokei went ahead to win by a margin of more than two minutes and beat her personal best by a single second in what was the second-fastest time ever run in Istanbul.

The men’s race was headed by a pack of nine through halfway in 1:07:15 and runners dropped off the pace one by one until only three remained. Sang, who had won the Izmir Marathon just five weeks ago, kicked ahead to win in a personal best of 2:11:49 ahead of Felix Kimutai and Hailu Zewde.