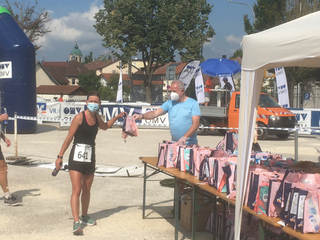 At the 29th Altötting Half Marathon everything was different from the previous events.

To avoid contact with participants start-numbers had to be sent by post. No late registrations were allowed. The children’s race had to be cancelled. Neither victory ceremonies nor showers were allowed. We had to change the start and finish locations to a large parking and festival area. Participants had to run the first and the last 1.5km on a bike path which connects the city with the forest in in which the rest of the race is run. We had to start a few runner at a time every 3–4 seconds.

Participants had to wear masks before the race and maintain 1.5m separation between each other – which was controlled by several volunteers. On the course they could run without a mask and there were no limits as to distancing while overtaking. The number of water stations had to be reduced from six to two at which 250ml water bags were placed on a table where the runners had to grab them by themselves. After having crossed the finish line finishers had to put on new masks which were distributed by the organisation.

The finish area was affected by the Corona restrictions as well. Bananas, water bottles, energy bars etc were all handed over in a pre-packed bag to avoid any contact. Even the finisher medals had to be grabbed from a table. All volunteers, like the participants, had to wear masks all the time and many of them protective gloves as well.

All in all it was an extreme effort but the positive feedback of the happy and satisfied participants confirmed to us that our organisation had done an extraordinary job.

The hot weather (25ºC) limited the performances. Local hero Josef Diensthuber won in 1:11:19 while the women’s race was dominated by Charlotte Taylor-Green who finished in 1:18:45 – more than 3 minutes outside her personal best. It was impossible to invite international runners but the National Anti-Doping Agengy still conducted tests.