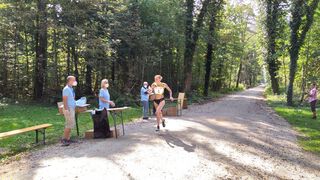 When all major events in Germany were banned at the beginning of April until the end of August we were still confident that we could come through with the race on 13 September. We thought September was still so far away that our race wouldn’t be affected. But when the ban was extended until the end of October we became nervous.

We developed a concept to make it possible to hold a smaller race. In a conversation with the local health authorities the concept and the hygiene plan were conceived, coordinated and finally accepted. One of our advantages is that our race route leads through the forest and that means that we get hardly any spectators. A limit of 1000 participants was agreed. There are of course a lot of additional restrictions and rules that we had to observe. Our aim was to give the runners an opportunity to test themselves and get results on a certified course.

Many thousands of medals and participant gifts (a towel with a photo print on it) were ordered for the race as usual without the year 2020 on them. That made it possible for us to use them next year (2021 will be printed on the ribbon of the medal). For this year we will order different medals – and only 1000 of them. This way we can save money and do not have to throw away thousands of medals. We are fortunate that our sponsors have remained loyal to us.

There were additional expenses such as for masks, hygiene items and postage fees for sending out the start documents and start number (which participants normally pick up at the race office the day before or on the day of competition).

The health and hygiene concept included the following detailed provisions:

• Mouth protection worn in the warm-up area. The mask need not be worn during the race but must be put on again in the finish area. FFP2 masks provided for those runners who lose their own during the race.
• Delegation of personnel to monitor measures are being observed (e.g. dispersing groups that may form in the start area).
• Start numbers sent by post.
• Flying start. There is no mass start or for small groups. Consequently formation of bigger groups on the course is mitigated. There are only approx. 500 runners each on the half marathon or 6km route.
• Refreshment stations on the course are reduced from 6 to 2, and none for the 6km race. Packaged water is available in bags placed on tables set up at least 3-4m apart with only one water-bag per table. When a runner picks up another is placed upon the table by personnel with face protection and gloves. No electrolyte drink or bananas etc supplied. Dropped water-bags which had contact with the runner are thrown away.
• Participants’ addresses are known. This presents no problem as all information is available via the registration system. For group registrations from companies / schools, this is entered as a mandatory field when registering.
• Participants are not to bring accompanying persons
• Participants are informed about the rules through e-mail and the event website.
• Information is sent to all participants via facebook and e-mail: Each participant must meet the following requirements: no health restrictions or symptoms of illness, no contact with any infected person for at least two weeks. Hygiene measures (keep your distance, regular washing and disinfecting hands) must be observed.
• Medals are placed on a table at the finish where runners pick them up themselves (with race staff supervision)
• Refreshments in the finish area: no electrolyte available. Fruit, energy bars and water-bags are placed in a bag for finishers to take away. Runners to keep going and not sit down or gather. Due to the staggered start and big reduction in the number of participants no crowds are expected.
• Music bands etc. are only outside the finish area in order not to attract spectators.
• Urinal accommodates only 3 people at a time. Staff will supervise to avoid groups forming when queuing.
• Toilets are available in the three adjacent schools.
• No late registrations, no award ceremony, no showers, no sports fair, no childcare, no warm-up programme, no pasta party, no stilt walkers etc, no changing rooms, no children’s run, no balloons, no portable toilets, no massages at the finish, no catering in the registration area

Our detailed 14-page hygiene-concept convinced the authorities. The 1000 limit was far lower than the 3000 participants in 2019 but it was still the biggest running event in Germany this year.

Everything was different from the previous events. To avoid contact with participants start-numbers had to be sent by post. No late registrations were allowed. The children’s race had to be cancelled. Neither victory ceremonies nor showers were allowed. We had to change the start and finish locations to a large parking and festival area. Participants had to run the first and the last 1.5km on a bike path which connects the city with the forest in in which the rest of the race is run. We had to start a few runner at a time every 3-4 seconds.

Participants had to wear masks before the race maintain 1.5m separation between each other – which was controlled by several volunteers. On the course they could run without a mask and there were no limits as to distancing while overtaking. The number of water stations had to be reduced from six to two at which 250ml water bags were placed on a table where the runners had to grab them by themselves.

After having crossed the finish line finishers had to put on new masks which were distributed by the organisation.

The finish area was affected by the Corona restrictions as well. Bananas, water bottles, energy bars etc were all handed over in a pre-packed bag to avoid any contact. Even the finisher medals had to be grabbed from a table. All volunteers, like the participants, had to wear masks all the time and many of them protective gloves as well.

All in all it was an extreme effort but the positive feedback of the happy and satisfied participants confirmed to us that our organisation had done an extraordinary job.

The hot weather (25ºC) limited the performances. Local hero Josef Diensthuber won in 1:11:19 while the women’s race was dominated by Charlotte Taylor-Green who finished in 1:18:45 – more than three minutes outside her personal best. It was impossible to invite international runners but the National Anti-Doping Agengy still conducted tests.