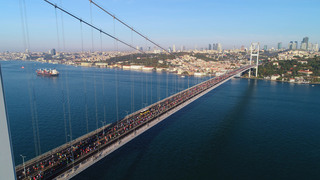 Istanbul Marathon offers the unique opportunity to run from one continent to another; from Asia to Europe.

The city has welcomed recreational runners from all over the world every year since 1979 for its largest annual sporting event. The race was first organised with only 74 runners, six years after the two continents were connected by the first of the three suspension bridges there are today. It was then called the Asia-Europe Race, later renamed as the Intercontinental Istanbul Eurasia Marathon. In 2013 it became simply Istanbul Marathon but kept its “intercontinental” concept.

The race starts on the Asian side and crosses the 15 July Martyrs Bridge over the Bosphorus Strait separating the two continents. It finishes on the European side in the ancient Roman Hippodrome, one of the oldest race tracks in the world. Having served successively as the capital of the Roman, Byzantine and Ottoman empires, over a period of 1600 years, Istanbul has a wealth of historical monuments as well as magnificent scenic beauty along the course.

Despite being a city of over 16 million people the citizens of Istanbul are happy to leave the streets once a year to participants in the country’s foremost running event. The first 5km of the course are mostly downhill, then it is mostly flat, but the runners must face a 2km uphill stretch before the finish. The course is closed to traffic until the 6-hour cut-off time is reached. Each finisher is certified as an “Intercontinental Runner” and receives a medal. The race offers prize money to the top three in both national and foreign masters age groups in 5-year increments from 35–85+ years.

Istanbul Metropolitan Municipality, the organiser of the event, initiated a project in 2014 called “A Greener World”, and the Istanbul Marathon has been committed to delivering a sustainable event ever since, with further initiatives taken every year. Besides adopting and promoting programs that conserve natural resources, eliminate waste, and minimise possible harmful emissions, a “Commemorative Marathon Forest”, which is the biggest legacy of the Istanbul Marathon to future generations, was created following a sapling planting campaign. Runners who register with the event donate saplings on voluntary basis during the Marathon Expo, including many foreign runners who bring seedlings from their countries to support the campaign.

Istanbul Marathon, a World Athletics Gold Label event, is just one of the three races on the day. It is the only occasion each year to travel from one continent to the other on foot. The 15km and the marathon attract 35,000 runners while the traditional 8km fun run receives about 70 thousand entrants.

The finish is in the heart of the old city next to famous attractions such as the Blue Mosque and Hagia Sophia. The Grand Bazaar, one of the largest and oldest covered markets in the world with 61 covered streets and over 4000 shops, is also close by. As most visiting runners stay in Sultanahmet, near the finish area, the organisers provide shuttle buses from here to the start on race morning. All tourist runners are treated with traditional Turkish hospitality in Istanbul.