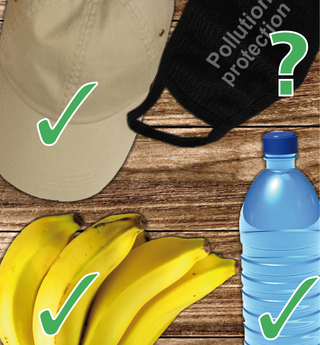 As I lace up for my morning run I take stock of what I need to carry: water bottle, check; light snack, check; cap, check; mask, check… wait – what was that?

There was a time not so long ago when my runs gave me my dose of fresh air. When the cool, fresh breeze would tease my senses and make me want to run further. As I put one foot in front of the other all I would hear was a refreshing wind brushing past my ears. The rhythm of my breathing would be like music as I became one with nature. Running was like meditation or pranayama – the breath of life.

With increased urbanisation our cities are becoming more polluted and the joy of running has been marred. What tickles my senses now is the particulate matter – soot – which smothers our cities.

As a cardiologist I have always focused on fitness. I am also a triathlete and love to run, bike and swim. My colleague, an environmental engineer and fellow runner, vouches for the fact that air quality over the years has worsened and made it more difficult to run – especially for long distance runners. As marathon runners we train long and hard and poor air quality is now becoming an occupational hazard. But, unlike drinking water, we have no choice – we have to breathe the air that is available to us.

According to World Health Organisation (WHO) figures 91% of the world’s population live in areas with above average levels of air pollution. World Athletics says that: “athletes are disproportionately affected by poor air quality due to the nature of their profession. It becomes worse when they train for large proportions of the day in cities where the air pollution is more intense.”

According to WHO figures air pollution kills seven million people annually; almost equal to the number of people killed by tobacco. Nitrogen oxide is among the four key pollutants that air quality monitors can capture, along with particulates PM10 and PM2.5 (meaning tiny particles with a diameter of less than one-hundredth of a millimetre and twenty-five thousandths of a millimetre respectively), and soot. The presence of these contaminants have a significant correlation with the runner’s performance. Despite months of meticulous training if the air quality on the day of competition exceeds a safe level it can be a major spoiler.

In the last five years at least three marathons across the world have been cancelled due to poor air quality and several other runs (both half and full marathons) have come very close to it but were still held despite high levels of air pollution.

The theory behind it is that the pulsed radio waves induce a charge in the particulates, causing them to attract, aggregate and settle down. This technology has been shown to reduce particulate pollution by at least 30% in outdoor urban environments. With a coverage area of at least 1500m radius Pure Skies can be successfully deployed along the route of a marathon and ensure clean air for the athletes on marathon day.

As the founder of Devic-Earth I was both excited and encouraged to use this technology at distance running events. My colleague, who heads Engineering at Devic-Earth, and runner, Radhica Kanniganti, recently completed the Mumbai Marathon 2020. Talking of her experience she recalls the fresh sea breeze that was instrumental in keeping the pollution levels low along the course. It literally provided a breath of fresh air to the runners.

Again, it comes back to the roots. Clean air is a necessity for an athlete. If the body and mind are fit, you can do anything. Where the Pure Skies technology has been used we have seen dramatic results in the improvement of air quality. It fills me with a sense of satisfaction to know that runners like me from across the world are able to run comfortably without worrying about the level of air pollution.

When my alarm goes off, gently reminding me of my run, I envision a city without pollution – a city with a network of Pure Skies, I also envision runners across the city getting up with the sun to get their dose of fresh air. For now, I have Pure Skies in my locality and I do what I love – while feeling the wind blowing against my face.