Ed Whitlock: one of the old school 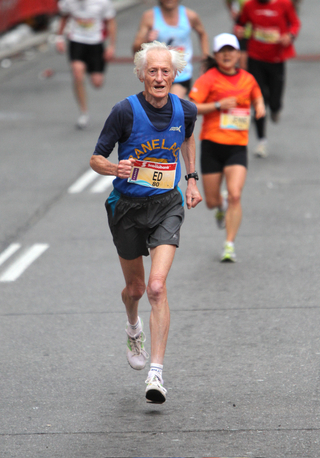 A clutch of elite Kenyan runners at the Scotiabank Toronto Waterfront Marathon on 16 October could do no more than blink in disbelief. The man who stood in front of them, Ed Whitlock, had just run the distance in 3:15:54 – a new over-80 world record.

Some of the elite Africans had abandoned the race when they realised the cold temperatures and strong wind were going to slow times. They sat on cots in the post-race recovery room staring at the white-haired Canadian. Whitlock himself preferred not to dwell on the weather.

“It was far from an ideal day, but things could have been worse. There was a significant breeze but the day before there was a howling gale. The time was a surprise. I was hopeful … [but] when I saw the wind I thought I’d better dial back my expectations. So my objective when I started the race was to do 3:20.”

He set off with that target in mind but found himself running next to a ‘pace bunny’ whose task it was to take runners to a 3:15 time. As he was towing a large group Whitlock tucked in behind to shelter from the wind. They passed halfway in 1:37:38 and ran fairly even splits the rest of the way.

“It was nice to let someone else worry about the pace. The group gradually dwindled away. I think I was the last surviving member when we got to 39km. We went over the Don Valley Parkway – not a significant climb but enough to knock the legs from under me. I had to let him go. It wasn’t too bad though once I got over the top. I held it together to the finish.”

Whitlock reckons he had another two or three minutes in him and had set his sights on a return engagement in Rotterdam next spring until he broke a rib in a fall on the steps outside his house in Milton, Ontario. It was in the Dutch city last year that he ran a then over-80 world record of 3:25:43. The interruption in training means he will not make immediate plans to lower the record further.

When he ran 2:52:47 in the 2003 Scotiabank Toronto Waterfront Marathon at age 72 he became the oldest man to beat three hours in a marathon, Exercise physiologists at Toronto York University asked him to perform in their laboratory.

“They had me do V02 max and a blood test on the treadmill to see if I had bionic blood – but I didn’t. Nothing outstanding. They mentioned that the testosterone was on the low side but [although] the VO2 max was higher than normally expected it wasn’t that high. I don’t think a high VO2 max is the reason for my success.”

Whitlock’s training is unorthodox and left the Kenyans shaking their heads. Partly to avoid crossing roads with so many impatient drivers and partly because he is a creature of habit, Whitlock runs laps of a cemetery near his home for up to three hours a day.

“It’s more like jogging. There’s no speed. I do small laps and don’t count them and don’t time them so I don’t get into competition with myself. I just concentrate on running for a long time.”

This affable character is a bit of a celebrity at races across North America and is often asked to pose for pictures or sign autographs. Younger runners naturally want to know if he is on any special diet which keeps him in such phenomenal shape. They are disappointed to hear he eats whatever his wife Brenda puts in front of him; some meat, lots of vegetables. If they go out for dinner he might have Dover sole.

“We don’t have roasts very often in this house. At Christmas and Thanksgiving we have turkey. Occasionally we have roast beef. We tend to be formal about our meals. We sit down for supper with a tablecloth. We don’t slum around the kitchen every night eating dinner.”

Ed Whitlock was born in Surbiton on the south-west fringe of London (GBR) on 6 March 1931. He emigrated to Canada in 1952 shortly after graduating from the Royal School of Mines, Imperial College, London. The seeds of his athleticism were sown in England where he was an active runner as a schoolboy.

He remembers winning the Ranelagh Harriers Schools’ cross country race in 1948 and 1949. On the 50th anniversary of his 1948 victory, while on a visit to his sister’s home in London, he asked if he would be allowed to participate as a guest.

“I went out to the club and said I would love to run in the inter-schools race on the 50th anniversary of the day I won it. That’s how I got involved with them. I ran the race and ended up 51st. It wasn’t my objective but it would have been neat to pick up one more place and end up 50th.”

It was a natural pairing. Ranelagh Harriers are celebrating their 130th season and have a fine historical sense. Two former members, Olympians Chris Brasher and John Disley, founded the London Marathon back in 1981. Whitlock often wears the club’s blue racing singlet – including during his record-breaking races.

When not out training Whitlock enjoys gardening or keeping track of Canadian road race performances for Canadian Masters’ Athletics. The lists naturally feature his name prominently and when recovered from the broken rib he will no doubt be adding more records to his tally. And leaving more bewildered young athletes in his wake.