The race over the River Kwai 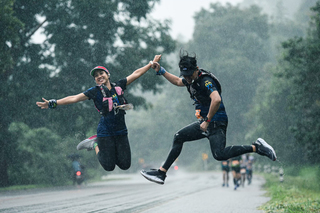 Here lie buried the atrocities and disasters of war. Over 80,000 Allied prisoners of war and Asian forced labourers, toiling in the rainforest and plagued by malaria and hunger, lost their lives during the construction of the railway connecting Thailand to Myanmar.

It was built for the transport of supplies and Japanese troops to Myanmar and became known as the Railway of Death. These historical events took place in Kanchanaburi province about 230km west of Bangkok.

A cemetery for the prisoners of war has been built as a memorial. The River Kwai Bridge, kept in its original condition, has become a popular tourist destination in Kanchanaburi. “Hellfire Pass”, where the captives were forced to cut through the mountain to construct the railway, lies about 70km from the city in Sai Yok district and has become part of the race route.

The River Kwai Half Marathon was the first in the country and will be held for the 39th time this year. It was first organised in September 1982 by a group of European expatriates with only 80 runners entering from Thailand and abroad. The organisers’ inspiration was the natural beauty of the mountains on the banks of the River Kwai. The unique and romantic River Kwai Village Hotel and Resort is located here at the start and finish line of the race.

The out-and-back course is on Route 323 which connects the city of Kanchanaburi to Thong Pha Phum. stretching to the Thailand-Myanmar border. The running surface is smooth and has some slopes to create a challenge. Green mountains wreathed in fog lie along both sides of the road. Runners often stop to take pictures here and of the rural villages and old temples. The weather is usually bright with a temperature of 18–20C and a sprinkling of drizzle that, as well as creating the misty effect, helps to cool you off. The views have left lasting impressions on many participants.

The half marathon is the main event but there is also a 10.55km race. Runners were unable to get enough of the route in the half marathon and lobbied for longer races so that on the 35th anniversary a 35km race was held. It has lengthened each year to match the edition of event and a 39km race is part of this year’s competition. Every participant receives a medal and commemorative shirt and 21.1km and 39km racers are also awarded a ‘Conqueror’ T-shirt.

The River Kwai International Half Marathon attracts runners from over 40 countries. Past events were able to accommodate only 4000 participants. This has increased since the River Kwai Village Hotel and Resort became the event’s official hotel but the organiser Amazing Field Co., Ltd. urges you to make decisions early.

See the latest news from River Kwai International Half Marathon