Run together in Minsk 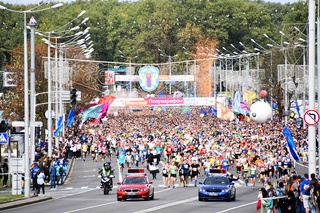 First run in 2013 the Minsk Half Marathon has increased participation by two and a half times since then. In 2019 the race won a World Athletics ‘silver label’.

Between the 2018 and 2019 editions entries increased from 35,000 to 40,000 and from 53 to 68 countries represented. Runners come from as far apart as Thailand to Trinidad, from Iran to Israel and from throughout Europe.

Belarus is famous for its hospitality and it is now becoming popular for its road races. It has become easier for foreign runners to take part thanks to the new visa-free regime for all runners coming to Belarus through the national airport for 30 days or less: just register for the race and we will send you the ‘Letter of Invitation’.

The course takes runners past Nemiga the House of Parliament, Victory Square, the Bolshoi Opera and Ballet Theatre, Trinity suburb, Minsk Arena, the Great Patriotic War Museum and other historical and attractive sights. The race takes place on Minsk City Day, so you can enjoy activities and entertainments after participating in this emotional event.

Apart from the half marathon there is a 10km, 5.5km and races for children. All the races have separate starts and some runners participate in several races and get multiple medals. Each year there is a new design for the finisher’s medal allowing regular runners to show off their collections. One of the particularities of the race is a bright and emotional start that energises you to run as fast as you can.

The most popular distance is 5.5km. Registration is capped at 25,000 and closes long before the event is held. Last year 8500 people ran the half marathon and a similar number the 10km. The number of corporate teams increases year on year.

The Minsk Half Marathon is a real celebration for each participant. While you run the distance you can also take part in many related competitions such as for the best-dressed runner, funniest costume, most motivating poster, best photo, best running family, Mister and Miss Minsk Half Marathon and many others.

While running you will mingle with the Minister of Sport of the Republic of Belarus, politicians, TV-presenters, singers, models, famous businesspeople – and even Olympic champions.

For several years Belarus’s Volha Mazuronak was the face of Minsk Half Marathon. In 2020 we anticipate that the European Marathon Champion will herself take part in the race. The event attracts amateur runners and elite athletes from all over the world. Split times are given every 5km which can be checked online and the race is streamed live.

For a 50-rouble (20 EUR) entry fee runners get bonuses from organisers and sponsors; those who run the 21.1km get a Minsk Half Marathon T-shirt. USD 60,000 in prize money is up for grabs.

Under the slogan “Run Together” the Minsk Half Marathon unites people of different ages and origins. It is an emotional and very heartfelt event.