Can you handle the “toughest marathon in India”?

City of pearls, challenge of running 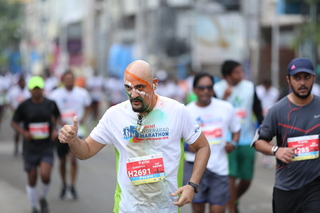 Hyderabad is a vibrant city of royal heritage nestling on the Deccan Plateau in southern India.

In its 400-year history Hyderabad has witnessed various successions after which traditions and cultures were mingled up to form a uniquely mixed pattern of living. Home to global IT majors, pharma capital of the country, heart of badminton in India and one of the first cities in the country to have its own marathon.

The inaugural edition of the Airtel Hyderabad Marathon was held on 28 August 2011. Mass participation sporting events like the marathon were hardly known in Hyderabad or in most of India. Conceived and organised by the Hyderabad Runners, a running club of dedicated volunteers who are passionate about running, this year marks the tenth anniversary edition.

The Marathon has earned the reputation of being the toughest city marathon in India with runners tackling hilly inclines and flyovers on a point-to-point course. With solid support from the police and local government the Hyderabad Marathon has been instrumental in creating a fitness revolution by helping people lead an active lifestyle.

The marathon starts by the Hussain Sagar Lake in the heart of the city and leads runners on a steady climb through the newer IT district showcasing Hyderabad’s transformation into a global hub for information technology. It ends with a vibrant, colourful finish inside the sprawling Gachibowli Stadium. The event has grown in size from 1300 runners in 2011 to a record 26,000-plus participants in all categories in 2019 – attracting both domestic and international runners.

Hyderabad houses stately mosques and noisy bazaars alongside swanky new office buildings and malls. These glimpses into the city’s rich past offer the promise of an even better future. The city of pearls and biryani, Hyderabad is also home to iconic landmarks like the Charminar and other historical places such as the Golconda Fort, tombs of the legendary Qutub Shahi kings, the Chow Mohalla Palace and Taramati Baradari. The rich culinary heritage of Hyderabad has recently earned recognition in UNESCO’s network of creative cities under the gastronomy category.

The monsoon month of August is now synonymous with the Airtel Hyderabad Marathon. Marathon weekend is an exciting three-day running event including a 5km fun run and 10km, Half Marathon and Marathon races along with a pre-race lifestyle, wellness and fitness SportExpo. The city’s vibrant culture and hospitality is evident in the passion and energy of the thousands of volunteers at the races.

The Airtel Hyderabad Marathon provides a platform for charities and NGOs to raise funds for the causes they champion. The thousands of runners and guests coming in from different cities makes the race a heavy contributor to the local economy.

Some call it a city of pearls, others call it a software hub while still others find glory in the classical heritage of the city. Come to the erstwhile City of the Nizams and run the Airtel Hyderabad Marathon.